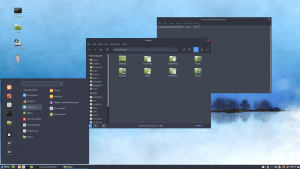 The Cinnamon desktop group can be selected when installing from a Netinstall ISO.