Revision as of 14:43, 9 September 2016 by Sgilson (talk | contribs) (Created page with "'''1. Break the distribution into distinct modules''' Let’s take this in stages. We can start by simply assigning individual packages to modules (at the sub-package level: ...")
(diff) ← Older revision | Latest revision (diff) | Newer revision → (diff)

1. Break the distribution into distinct modules

Let’s take this in stages. We can start by simply assigning individual packages to modules (at the sub-package level: we may have a need to have a library in a base module but have its -devel subpackage in a developer-only module, for example.) This ignores the branching of packages and modules, but as stated before, that’s a separate topic.

Note: The module boundaries here are just examples. They are illustrations to show how we can break the monolithic distribution up. They are not proposals that we should draw the lines between modules in any particular places: that is an entirely separate discussion.

We can start with some obvious “core” modules such as hardware enablement, system runtime and core application runtime.

The installer needs GTK and Anaconda; let’s make sure we have homes for those.

This leaves a lot of content currently not assigned to a module. That’s fine, we can figure out how to handle those; for example, we could choose to define a module for “uncategorised” for now, and another for those packages currently in Optional.

All we have done so far is to draw boundaries around groups of existing packages: 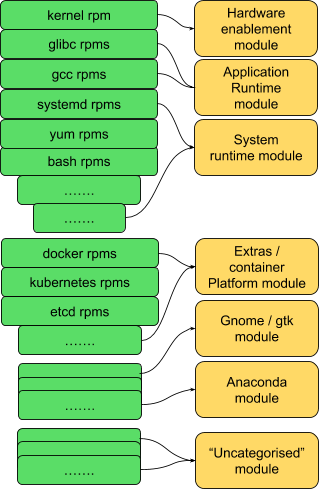 We can add Apache, php and mariadb, and we could have the components of a LAMP stack, etc; there are plenty more groups we can imagine here.

Note: This picture shows a static allocation of packages to modules. So, modules have a static manifest. This is deliberate:

To enable an engineer to manually allocate new dependencies to modules, it it necessary that module manifests should not just be automatically generated. We consider that manifest to be one of the defining properties of the module.

2. Automate the composing of modules from packages

We now want to compose a module. Bear in mind, “composing” the module here involves assembling pre-existing binaries: it’s more a “createrepo” than “rpmbuild” (and is similar to a “puddle” build in current RCM terms.) And the automation we’re talking about here is the execution of the module compose, even if the compose is actually triggered manually.

A module compose is now simply the creation of a yum repository of the required packages or subpackages, with the addition of a small amount of module metadata as described in Building modular things. 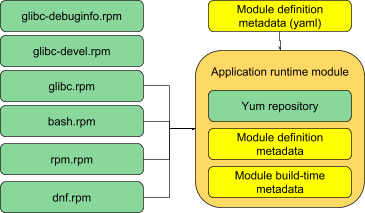 We plan the module definition metadata living in dist-git, similarly to how we currently maintain component spec files, sources definitions and patches. Regardless of where it lives, the module compose must be well-defined based on static content. The essence of an automated build system is that when a compose is required, there should be no compose-time configuration added; everything to compose the module is stored in SCM and should be completely repeatable from there.

This workflow mirrors existing practice for building binaries, where a developer expects to be able to build and test an rpm locally for a single architecture, before submitting to the build system to be built on multiple architectures. In the same way, we would expect the build-system module compose tool to pull together the necessary packages and to create arch-specific modules for each required architecture.

We mentioned before that we expect modules to have a static manifest. During module compose, however, we would still expect to perform repoclosure on the module: ie. to verify that the module satisfies the dependency requirements of all packages it includes. Failure of repoclosure should constitute a failed compose of the module. The tooling may still attempt to solve missing dependencies automatically, but should only report to the user which packages could be included to satisfy those dependencies; it should not include those in the output without confirmation from the module owner.

To automate module composes it will be vital to know exactly which version of which packages should be used to compose any given module (eg. for brew builds, this would be selected by brew tag.) The important point is that all of this should be configured in the module metadata so that we can compose the entire module automatically.

3. Automate the composing of stacks from modules

Recall that a stack is nothing more than a module that depends on other modules; the stack simply refers to that whole tree of dependencies.

So composing a stack requires nothing more than composing a module that has dependencies. We define that top-level module via a metadata file in dist-git just as for any other module. The required dependent modules are listed in the module’s defining metadata. This is important: just as for a compose of an independent module, the entire module compose is well-defined based on static content.

The only difference in the compose of such a higher-level module is in the checking of internal rpm dependencies: both the repoclosure test, and any hinting done to suggest missing packages, should be performed on all packages in the entire stack, including all of the packages from other modules that this module depends on.

Of course, we may be composing a module multiple times. And to manage consistency between modules when things are changing, we really need to be able to determine exactly which version of a module has been composed from exactly which versions of its dependencies. So each module compose must have a unique compose identifier of some form; and during a layered module compose, we must record the compose IDs of all the modules used as input for this compose.

So to compose a PHP-on-Apache stack we might simply compose the base runtime module, then a layered Apache module, and finally a php module on top, in that order: 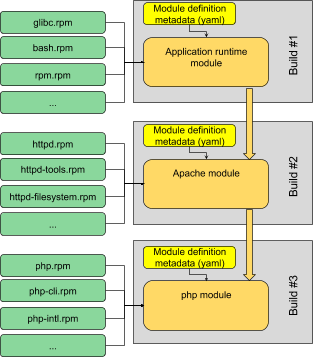 4. Automate the composing of images and other artifacts

So, now we’ve got enough modules to represent entire stacks of content suitable for installation to solve some user problem. But still, these are no more than repositories of available content; we still need to actually install them to use them.

Sometimes the user will install them themselves; the module client can automate the complete installation of an entire stack of dependent modules seamlessly.

But sometimes we’ll want to pre-install the content into some other artifact: a container image, an installer iso, or an ostree tree, for subsequent delivery to the user. That’s fine, we can drive whatever tools we need to build these artifacts. The only principles we rely on are the ones we’ve already mentioned:

5. What happens when a compose fails?

One problem with a monolithic compose is that a single problem can fail the entire compose.

How do we prevent a similar situation where a broken compose of a base runtime module causes compose failures for all other modules depending on it?

Having a granular compose process actually improves this situation significantly. We simply need to remember the most recent successful compose for any given module, and use that compose for any subsequent layered composes.

So far we have talked about “composing” a module in terms of re-running the creation of that module from its component parts (the packages it contains, and the metadata belonging to the module) on demand. When a module compose is requested, the build system must have enough information to complete that compose on its own, but the build system does not necessarily know itself when to compose a module.

But of course, we can automate that part too. Just as a CI package workflow might want to rebuild and retest an rpm when a dist-git event occurs, we want to be able to recompose both modules and artifacts whenever their content changes.

The details of each individual task here are not important; indeed, it is important to include many different types of task in this automation. Recomposing a module may be triggered by an rpm rebuild; that recompose may trigger other module recomposes, and additionally may trigger other image rebuilds. We may add CI to the mix so that testing tasks are also triggered when appropriate.

What is important is that the chaining of tasks is automatic. When something changes in the content tree, the build system must know (or be able to tell us) what else needs to be rebuilt or recomposed as a consequence; it must have the information needed to perform those rebuilds without additional manual configuration; and it should have the ability to trigger those rebuilds automatically subject to rel-eng policy.

Which leads us to:

A CI / chain-build toolchain is fundamentally asynchronous. Content is rebuilt, recomposed or re-tested when its dependencies change. This is deliberate: a modular release is, by definition, attempting to break up the monolithic, synchronous Compose.

But ultimately, engineering still wants to be able to produce a planned release spanning many modules, and users still want to have controlled, predictable releases, rather than having modules dribble into a release in drips. We still have major release events such as Fedora major/minor updates, and we have been going further in this direction recently for errata with the advent of consolidated batched updates in Fedora 24 z-stream. Atomic Host updates need a coordinated release of base Fedora updates plus container enablement from -Extras; and a new release of Software Collections involves the synchronised release of many individual stacks.

So decomposing the release into loosely-coupled compose steps is all well enough, but we need more than just chain rebuilds to bring it all back together. We need to know what modules need to come together on what date to make a given release.

So we introduce the formal concept of a release as a concept that defines requirements across multiple modules. The release would define, for example:

This information cannot be inferred from the individual modules comprising a release. The reason is simple: it’s a primary assumption in modularity that any one module may be included in multiple products and/or multiple releases.

Furthermore, there is a chicken-and-egg situation involving build-system automation of modules. If module definitions live in dist-git, then how does a build system know which dist-git repositories to look up to know what builds need to be performed automatically? The release is a natural place to define that.

Note: Technically, a release could easily be encoded as yet another dist-git module itself, one with many dependencies and no additional content of its own. It could be similar to an rpm meta-package in this regard. But it is still a distinct concept.