Revision as of 14:43, 9 September 2016 by Sgilson (talk | contribs) (Created page with "We need the flexibility of a smaller, more modular distribution that can be reassembled in various different fashions. But we also need to be able to reproduce our current pro...")
(diff) ← Older revision | Latest revision (diff) | Newer revision → (diff)

We need the flexibility of a smaller, more modular distribution that can be reassembled in various different fashions. But we also need to be able to reproduce our current product lineup, or something very similar, in order not to disrupt our existing install base:

Having categorised the Fedora rpms into groups and composed those package groups into distinct modules, creating what we have traditionally called a distribution variant can now be done simply by creating a flat yum repository containing all the desired modules for that offering. In the terminology we are using here, the output repository is simply another output artifact. 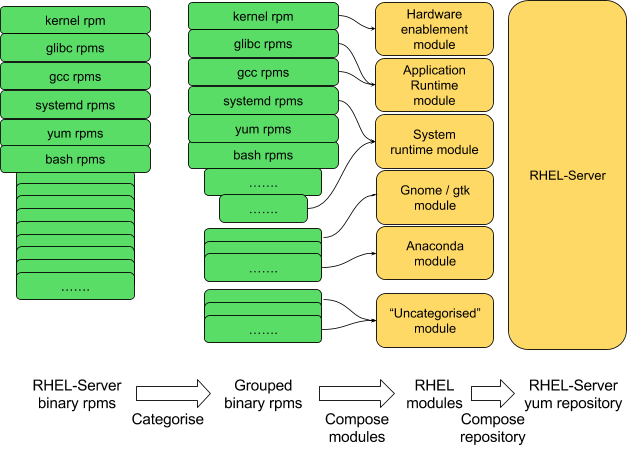 And of course we can repeat this for different Fedora variants. Having separate GTK and Gnome modules would allow us to include those modules when composing the Fedora Workstation repository, but omit those from the Client Node variant if we chose. It would also give us a natural way to reflect that Gnome may rebase at a different cadence from the base runtime.

So today’s variants can simply become different ways of selecting from the available modules.

The installer iso can also be composed from the various modules here, as a separate output artifact. The main difference from the traditional monolithic Compose is that the repositories, images etc. that are composed today are still composed, but each is created as a logically separate build.

Add-ons are not drawn above. An add-on is almost completely synonymous with a module here, and the modules composed as above can naturally reflect the composition of add-ons.

A key point of a broken-down, asynchronous build toolchain is that we can create composes from different modules with different SLAs or lifecycles, and can combine both modules and existing artifacts into yet further artifacts.

For example, we can define a tree of required artifact builds for Atomic Host and our Docker container images (each purple box here represents a distinct artifact created by a distinct compose task): 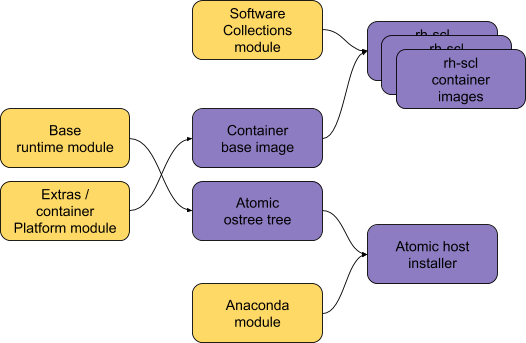 The Fedora-Server base system and Extras today already have distinct SLAs and lifecycles. We already build atomic host trees out of both of those sources, and this can be done easily as a compose step based on the base runtime and container platform modules in a modular build of the same components.

But we also need to support layered builds, such as additional container images layered on top of the base image, or Anaconda installs of an existing ostree tree. As long as we can track which compose steps are used as input to each compose task, we can track the relationship between these output artifacts even when we have decomposed the monolithic Compose into many parts.