Difference between revisions of "User:Condor" 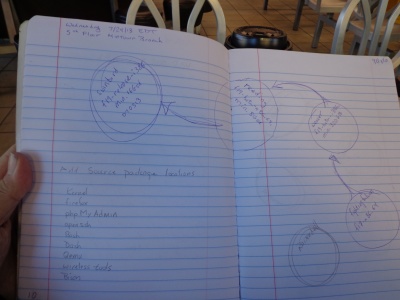 Decison making tools in action: What should be the next installation?

This content concerns community involvement starting with comprehending Fedora Quality Assurance practices and protocols related to being friendly. Looking above Quality Assurance my first observation is the importance of the current release schedule and the nature of Fedora's Hybrid Release Schedule. These observations are of the release of Fedora 33 in October 2020.

f34 current while f35 is under development

As an example of using my time better for the Fedora 35 release cycle I'll first examine the Validation Testing material then begin downloading the current nightly compose nominated for testing. My primary production machine is a desktop back in my home lab that's been neglected since I began working graveyard shifts.

f33 current while f34 is under development

Writing an evaluation before the end of the procedure seems odd, but sometimes we need to take a breath and collect our thoughts. This is only the second release cycle I'm following closely and I'm making decision on the move. For instance, the delicate Win 10 installation that's been my laptop's internal hard drive has been removed and the ancient 60 GB SATA drive I've used for testing is now the laptop's internal hard drive.

It seems best to base testing on what is important when using a production installation in a production role. It also good practice to continue testing the features previously tested as part of the lead up to new testing. Hence, looking at btrfs, ARM, and pipewire, before on to test Gnome 40.

Early adopters of the next release need the new software to be production quality ASAP.

f32 current while f33 is under development

The Life Cycle of a Fedora Release

How Grubby Can You Be?

Visit me here: My Personal Blog