Document is Final
The contents of this beat have been sent for translation for the GA version of the Release Notes. Any additional changes to this beat will not appear until after the release of Fedora 12. If you have zero-day changes, be sure to post a bug.

In the latest version of Xorg included in this release, if you have a dual monitor setup, your desktop display will span across them instead of using a cloned display by default. This matches the behaviour of other operating systems.

The GNOME 2.28.1 desktop is part of this release, and is the default environment used in the Fedora Desktop Live image. The Desktop Live image is a downloadable CD you can use to test the new GNOME environment with or without installing it. The image can be written to CD, or to a USB flash disk using these instructions.

Compared to previous Fedora releases, there are a number of other changes in the default configuration of the GNOME desktop:

Empathy is still under evaluation for this release. The major pros and cons are listed below:

Totem only supports a gstreamer backend now. The totem-xine backend has been removed completely.

A very early version of GNOME Shell is now available in the repository. GNOME Shell is a key part of GNOME 3 and is in active development with the heavy involvement of Fedora developers and interaction designers. A simple way to try out GNOME Shell is to install the desktop-effects package 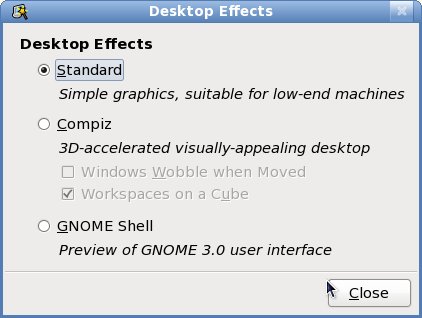 If you would like to configure it manually, run

You can also run the following to invoke it directly.

KDE 4.3 is the latest release of KDE 4. There are a lot of enhancements and new features. Plasma has a new Air look, improved job and notification management and fully configurable keyboard shortcuts. There are also new Plasma widgets and existing ones are improved. KWin is optimized for performance and brings new desktop effects to KDE. KDE now contains a new bug reporting tool, making it easier to report bugs to the KDE developers.

The Better Webcam support feature for Fedora 10 has done much of the groundwork needed for properly supporting webcams in Linux. We now have a library (libv4l) for decompressing various proprietary video formats in userspace, and almost all webcam using applications have been patched to use this library.

The second push for better webcam contains of 3 pieces:

The ABRT automatic bug reporting tool is replacing bug-buddy and kerneloops in the F12 desktop. ABRT has an extensible architecture and can not only catch and report segmentation faults and kernel oops, but also python backtraces. In contrast to bug-buddy, it can catch segmentation faults in any binary, not just GTK+ applications.

If you have manually modified the GConf settings for the bug-buddy GTK+ module before, you may see warning messages like the following from GTK+ applications:

To get rid of these messages, run the following command in a terminal in your session: