Zuul [1] is the CI and gating system from the Open Infrastructure Project [2]. It is able to scale and handles by default features such as artifacts sharing between jobs and cross Git repositories testing. You can see Zuul in action here [3].

Below is a list of features proposed by Zuul and its companion Nodepool:

Until now, Zuul was only able to listen to Gerrit or Github events. Recently a new driver [4] allow Zuul to interface with Pagure as well. Pagure, Zuul and Nodepool could therefore combine into a very efficient CI/CD stack.

How to Zuul attach a Pagure repository on Zuul

Configure the repository for Zuul

In the project settings:

This helper script could be used to ease the setup: https://pagure.io/fedora-project-config/blob/master/f/tools/project-settings-helper

Add the repository into the Zuul configuration

Open a Pull Request on https://pagure.io/fedora-project-config

Edit resources/fedora.yaml and add the repository such as:

Once the Pull Request is accepted and merged, the repository should be available in the Zuul project list: https://fedora.softwarefactory-project.io/zuul/projects

Note that all repositories with a name that match the regexp '^rpms/.*' will get, by default, the jobs defined by the build, lint, test templates attached. Thus, if the default configuration is sufficient, then no need to edit the zuul.d/projects.yaml file as explained at the end of this section.

We have managed to provide some standard Pull Request's jobs and workflow. This idea is to reduce the amount of manual steps to propose packaging changes to Fedora by taking advantage of CI.

We propose a set of templates (a template can be seen as a workfow of jobs reacting to Pull Request events). Templates are available here https://pagure.io/fedora-zuul-jobs/blob/master/f/zuul.d/templates.yaml.

Templates configure jobs through three types of pipeline (not the same as Jenkins/Gitlab pipeline concept):

Conditions for a Pull Request to be approved:

To attach a template to a repository you need to open a Pull Request on https://pagure.io/fedora-zuul-jobs-config.

Once the Pull Request is merged, the jobs of the chosen templates are attached to the repository.

Sequence diagrams of the PR workflow

These diagrams show interactions between components involved in a workflow where build, lint, test, publish templates are used. 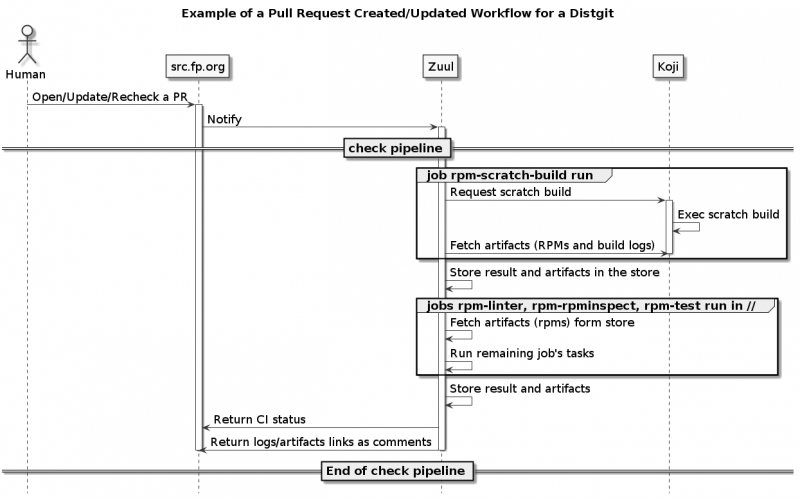 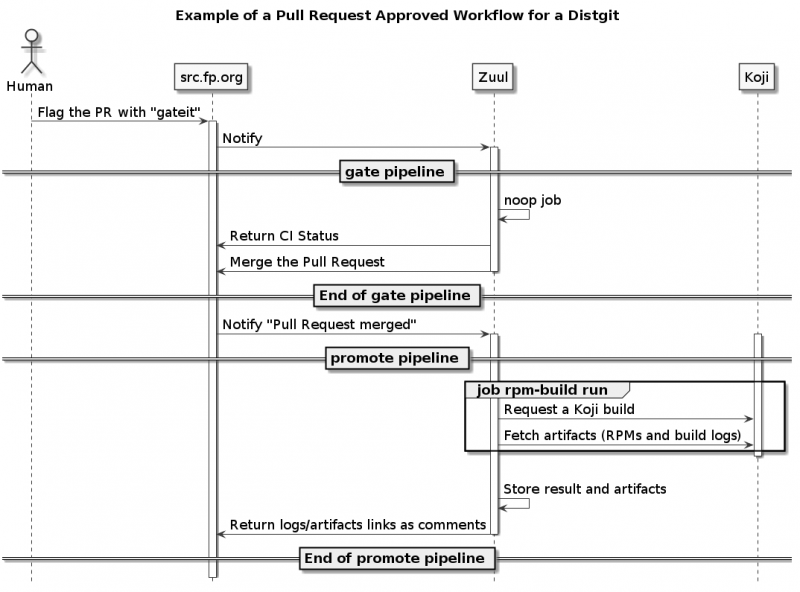 Example of PR managed with that workflow

For any questions or issues you can contact fbo on freenode on #fedora-ci or #softwarefactory or you can create an issue on https://pagure.io/fedora-zuul-jobs/issues.

Also the work in progress and next steps are tracked into that Taiga EPIC: https://teams.fedoraproject.org/project/ci/epic/14