Obsolete
Please refer to https://fedorahosted.org/echo-icon-theme/wiki/Guidelines for the latest version of the guidelines

Echo is currently a new set of icons proposed for inclusion in Fedora. Designed with a dynamic perspective, Echo icons aim to appear more realistic while still maintaining a clean and simple design by utilzing high contrast and spots of vibrant colors. The following are general guidelines to creating icons in the Echo look and feel. To view and post icons, please visit the EchoDevelopmentGallery .

Each icon is created in a vector program (Inkscape/Illustrator) and often finalized in GIMP/Photoshop. The used output is currently a .png with tansparent background. For OpenSource purposes, please also upload your vector file in .svg format so that others may derive and/or more easily create additional icons. Upload icons EchoDevelopmentGallery or post to Fedora-art-list for discussion and feedback. 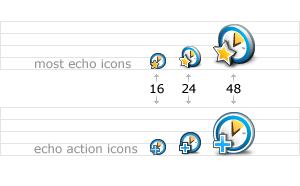 Listed below are the various icon sizes and where they are used. For now Echo will focus on the 3 commonly used sizes of 16 (appearing in the corner of window borders), 24 (used in the menu), and 48 (as icons on the desktop).

Note that the smaller icons are not merely scaled versions of the larger icons. Due to the limitation of space in the smaller sizes, there usually is a need for a bit of simplification and tweaking. Take the time to rework the icon if needed. Make sure the image is distinguishable and not muddy. With this said, keep in mind that any new icon/logo you design will have to work (or look similar) at 16x16.

Echo employs the use of three (3) types of perspective:

The shadow is formed by lines from the isometric grid. It is appears primarily behind the object; as well as a bit in front of and under the object. Do not to use black, as it is too harsh and does not scale well...dark gray is acceptable.

Shadows for icons can be created in Inkscape (using the blur effect). Here are some basic values.

Challenge: Something I'd like to try and and challenge this set to do is to create slightly tinted shadows. From painting experience...object of any given color will cast a shadow tinged with that of its complementary color and tinting neighboring colors. Juxtaposing complementary colors will also add higher contrast to the icon. Example: a blueish object will therefore cast an orangish shadow, while a reddish object will cast a greenish shadow. (See below.) The coloring is very subtle but I think that this could be one of the small things which could make Echo stand out.

If this is too involved, please use the standard dark gray instead.

Outlines help define the shape of an icon. At smaller sizes, the outline should help users recognize the icon by presenting an identifiable shape. A well designed outline should also add to the discernability of an icon on light and dark backgrounds.

I did not want the outline to be a mere line which evelops the icon. The outline should add more to the icon...to be a shadow when it's on a light background, and a highlight when it's on a dark background. During my icon research I came across iconfactory.com , whose contests section contained Underwater - by Yegor Gilyov (shown below). The outline used here was not just an uniform solid line. Note its various widths (the outline towards the right and bottom are wider than the upper right), colors (the outlines are comprised of several colors cooresponding to the part it covered, there's even the use of gradients to add to the icons overall shape and shading), and overlap (the outline doesn't just exist on the outside, some flow inside to help define the shape of the icon). I incorporated this concept into the Echo icon design (see Echo sample icons below).

Plus SVG is used for action icons (thus often forward facing) symbolizing the creation of something new by the user. An example is the creation of a new contact in an address book. Such things are created by clicking on a button with a representative icon; whose icon name usually ends with "-new."

Star SVG should be used to note something that is new or upcoming in time. More generally, it symbolizes a state of being rather than the action of making it so (as the + would denote). Examples are such icons as mail-marked-unread and appointment-soon.

An attach point is a location (x,y) on the icon that can be used as an anchor point for attaching emblems or overlays. If no points are specified, then default positions will be used. 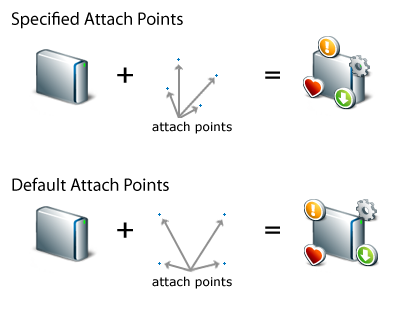 Attach Points is a list of points, separated by "|". The points are pixel coordinates from the top left corner of the icon, except for SVG files, where they are specified in a 1000x1000 coordinate space that is scaled to the final rendered size of the icon. For additional technical information written by Alex Larsson.

Same as Tango, icons are cc-by-sa with icon naming licensed under the GPL (see the bottom of Tango Project page ).