This document describes how AutoQA is structured internally. 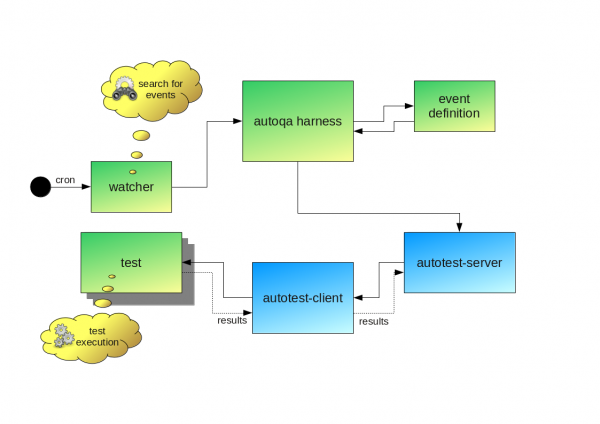 AutoQA defines "watchers" that look for various "events" happening within the Fedora development/build process and then announce them. A single watcher can check for and then announce multiple events. Announcing event means running main AutoQA executable and providing all mandatory arguments for such an event.

The event definition says what a particular event means semantically ("new package built in koji", "some yum repo has been updated", etc) and defines what information are needed to be received from the watcher to be able to execute related tests.

For example, the post-repo-update event is triggered whenever yum-repo watcher determines that a Fedora repo is updated. The repo update is the event, and, obviously, any post-repo-update test needs to know the URL of the repo that was just updated. (This is an example of a required argument.) Certain repos can't be used properly without other "parent" repos (for example, the Fedora 11 updates repo isn't useful without also knowing the address of the main Fedora 11 repo). So a list of "parent repos" is an optional argument to the tests.

This is a program that watches for the event and launches the autoqa harness when the event occurs. The Watcher is responsible for filling in all the optional arguments for the event and passing that information along to autoqa. Typically watchers are run periodically through cron.

The autoqa test launcher needs to know how to process the arguments gathered by the watcher.

More detailed information about implementing new events can be found in Writing AutoQA Events and Watchers.

The autoqa harness is launched by the watchers in response to an event. It's basically just a python script, /usr/bin/autoqa, which handles the arguments passed by the watcher and schedules the appropriate tests to be run in autotest.

Autotest is "a framework for automated testing". It handles scheduling test jobs from the job queue, putting the test code onto the appropriate test machine, running the test, and gathering the test results for later examination. For more information see Autotest.

AutoQA tests consist of some test metadata, some setup and test reporting code, and the test itself - which may be a pre-existing test or a new test written specifically for AutoQA.

The test results are reported back to the Autotest system and can be examined through its web interface. Tests can also opt to report their results in other ways - commonly by sending email to the autoqa-results mailing list.