SSSD (an acronym for 'System Security Services Daemon') is a Fedora Hosted free software project that aims to provide access to identity and authentication remote resource through a common framework that can provide caching and offline support to the system. It provides PAM and NSS modules, as well as D-BUS based interfaces. It provides also a better database to store local users as well as extended user data.

The legacy system is best classified as a set of cobbled-together technology pieces, while SSSD is more integrated.

What is the design problem?

We have a new developing technology, SSSD, to manage authentication and need to provide a UI design to help desktop users to configure authentication for their systems. There is a legacy UI in place to do this though - system-config-auth - and it is difficult-to-use. However, the old UI supports some functionality that has not been implemented in SSSD yet.

The challenges here are:

Who is meant to use this UI?

First of all, these UIs are both accessible to users who have root-level access to the system in question. We restrict our target users to those users who administer their own system enough to have acquired root access. Users whose system is administered by someone else will have this setup already configured for them.

Secondly, while it is possible an administrator could use ssh -Y to connect to this configuration UI on remote servers with X & GTK+ installed, it is assumed that this tool will primarily be run on the system it is being used to configure. Therefore, we're assuming a desktop workstation with a monitor or a laptop, and that the user is sitting in front of the system.

Next, let's talk a little bit about system authentication. This application is targeted for users who use network-based / centrally-managed configuration. We assume the vast majority of Fedora and Linux desktop users use what is called 'local' authentication - this means the user account used to allow them to log into their system exists on the system and not in some centrally-managed database. These users will not get any use out of this UI. This is not to say these users would not interact with a remote account to say, get their corporate email. What this means, practically speaking, is that our assumption is that when most Fedora users turn on their system and get a GDM / KDM / XDM login screen in order to access a desktop environment on the system, the username and password they type on that login screen exist locally on that system, not in a centralized database.

In summary, our design assumptions for the target of this UI are as follows:

This user uses a single centrally-managed account to log into their system, most likely their place of employment or maybe school (I assume most US schools don't do this though.) They may also have a local account for debugging / troubleshooting or for personal work on the same machine. This configuration will be supported by the UI.

This user may need to log into their machine using two or more accounts that are centrally-managed via two or more systems. For example, if a user is an employee for one corporation and a contractor for another, and has a login to each on the same computer. Extremely rare case. To address this case, the user will not be able to use the UI - instead, they will need to hand-configure this setup in the configuration file. If a user has multiple domains, they will almost never have more than 3 or 4, and 2 is the most common. Sometimes, the user might have domains configured that are not active. They may need a function to set them as active or inactive.

This user only uses the built-in local authentication and account system. They do not need to access a centrally-managed database to log in. This case represents the vast majority of users.

Stories For How Users Will Encounter This UI

What login/authentication methods does SSSD support? What methods are supported by the legacy system?

For looking up user accounts on the network, SSSD supports:

NIS will be supported in the future.

A Note About Offline Authentication

ervers have policies that enforce how often a user may log in while offline without connecting to the authentication server, and can set when that cache expires. Client-side, you can also enable or disable offline login and how old the cache is allowed to get before the user must connect to the server. The server settings, of course, always override what you can set on the client. If the server says your cache will only last 3 days for offline, and you set it to expire after 99 years client-side - the server setting is going to trump the client setting. The client-side enforcement is easily gotten-around by a user with root. It's really not there to prevent a user from logging in to their local machine. Truthfully, it's real purpose is to provide two things, when it's configured correctly (i.e. set up to expire at least somewhat before the server-side enforcement expires).

These policies are meant mainly to require users to 'phone home' frequently enough to stay in compliance with account policies - for example, so the user will hit forced password changes. To the user, though, expiration means that until the user can connect to the appropriate network, they are effectively locked out of their account on their machine.

There is a tension here between the central system administrators' need to enforce their policies and the end users' need to be able to log into their system and get work done. Since the server policies trump the client-side policies anyway, I suggest to always set the client to enable offline login, with a cache that has an indefinite lifetime. In situations where this is unacceptable, clients may be deployed with a different default configuration. Also, the server would override the setting anyway.

The way that server-side enforcement of a mandatory connection time works, is that if the system doesn't check in for X days, the server will automatically disable their network credentials. This means that even if the client does come back and try to auth after this time, they will be unable to gain access to network resources until they've called their helpdesk/IT department and had their account unlocked.

A Note About Checking For User Errors

A situation that could have an extremely negative impact on the user experience here is if the user fills out the screen in such a manner that they lock themselves out of being able to log into their computer. When the users are locked out, and sitting at GDM trying to log in, we can't really know why exactly they are unable to log in (they could honestly be mistyping their password, or they could have goofed up the url for their LDAP server.)

We want to try to minimize the chances the users end up in that locked-out scenario. I've added little icons / messages throughout these mockups here to suggest that preventing user error up front, by checking to see that entered URLs are valid at the time they are entered, before the user is locked. It is understood that in some cases the ability to check for these things is not possible, not reliably possible, or would require effort well beyond the scope of the changes being made to the dialog now. That's completely cool. I think it is good food for thought though, to consider whether or not this is a good mechanism to minimize our users' chances of getting locked out of their own machine.

One note about these little checks - if some of the resources the user inputs are on a VPN, as Stephen Gallagher pointed out, the user is unable to connect to VPN during firstboot when this dialog first appears, so a valid URL on a VPN network you're not connected to will indeed fail. To account for that case the messages could use language to reflect, 'we can't contact this resource now' or some other solution could be worked out. So please consider this aspect of the mockups a suggestion that could definitely be improved upon.

Here is a gallery of the current system-config-authentication UI from Fedora 12, taken 09 February 2010. Note that this UI is quite old, but the 'SSSD settings' tab was added recently as part of the first phase to integrate SSSD into Fedora 12.

Things To Note About These Mockups 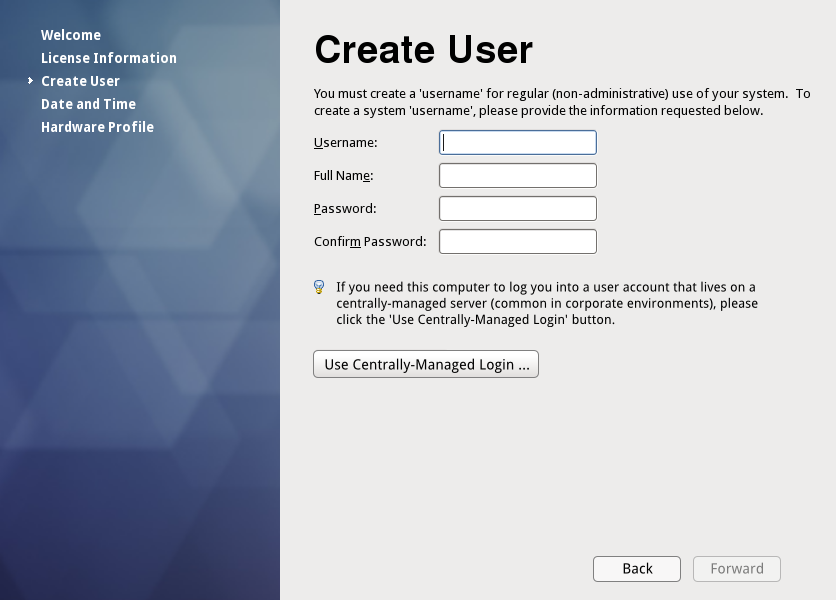 Smart cards will be handled in the 'Advanced Options' tab as they apply to both local and centrally-managed accounts.

Diagram for your convenience:

Paths Through the Tab 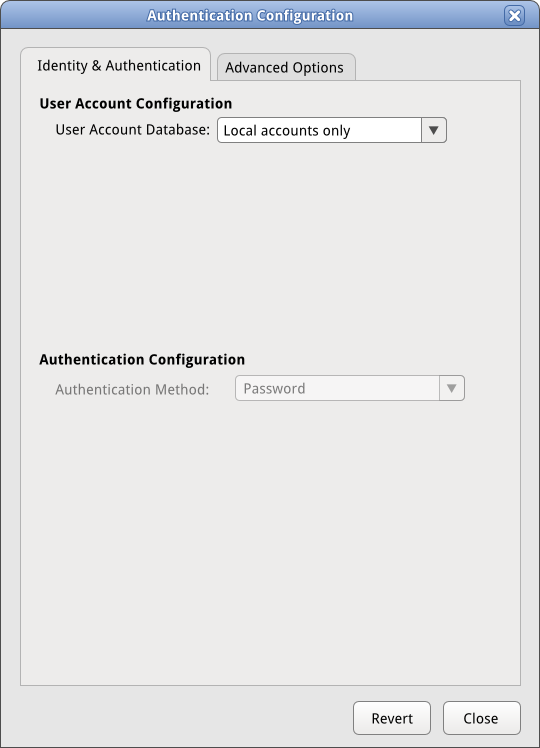 Can we check to make sure the server exists and is contact-able? 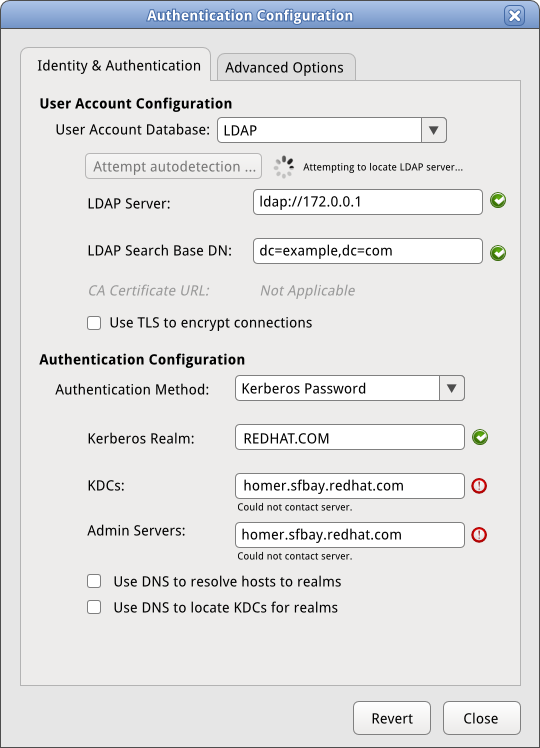 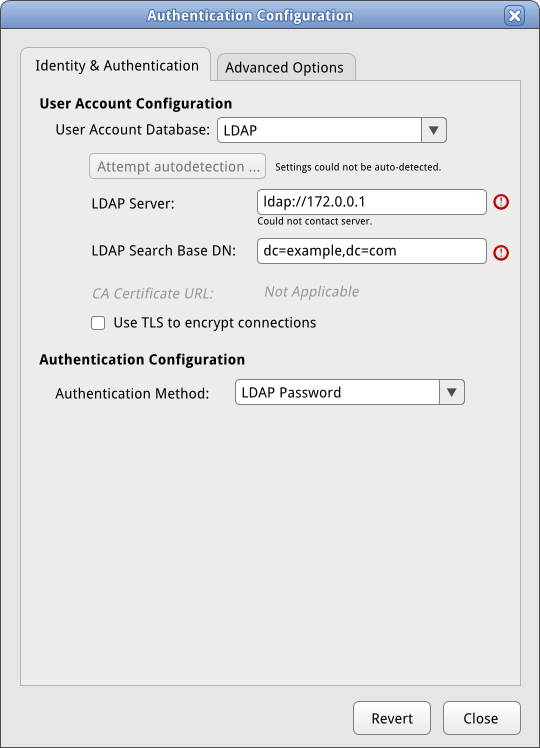 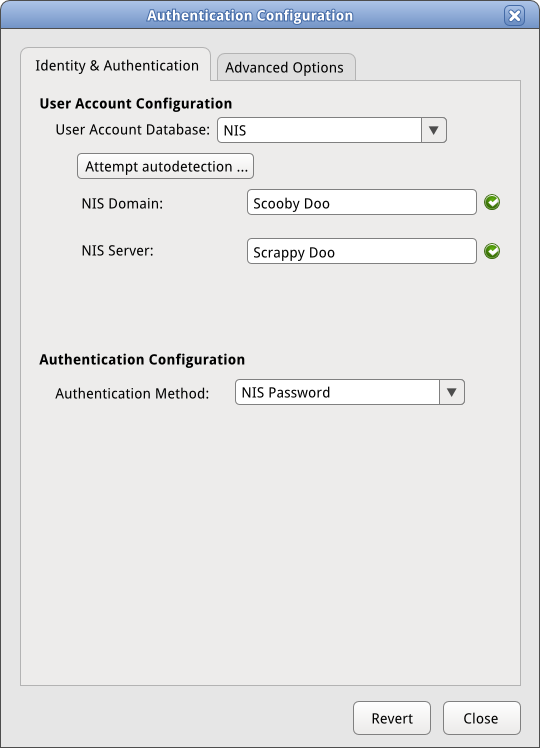 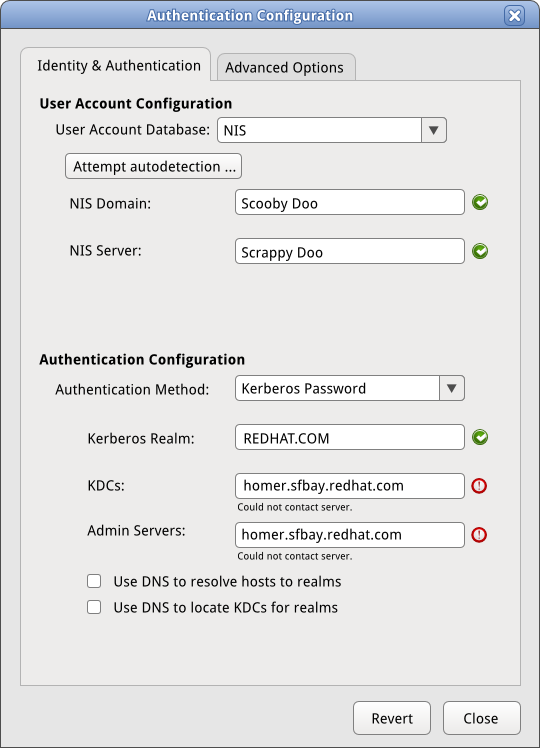 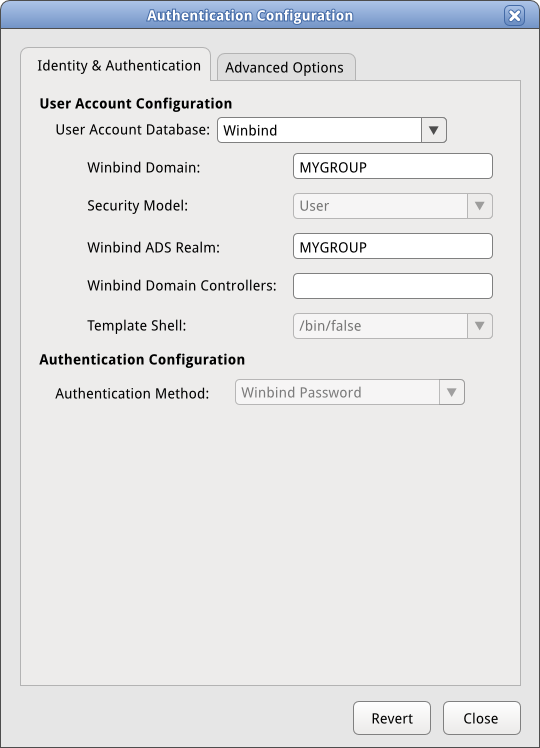 Smartcards will be set up via 'advanced options.' 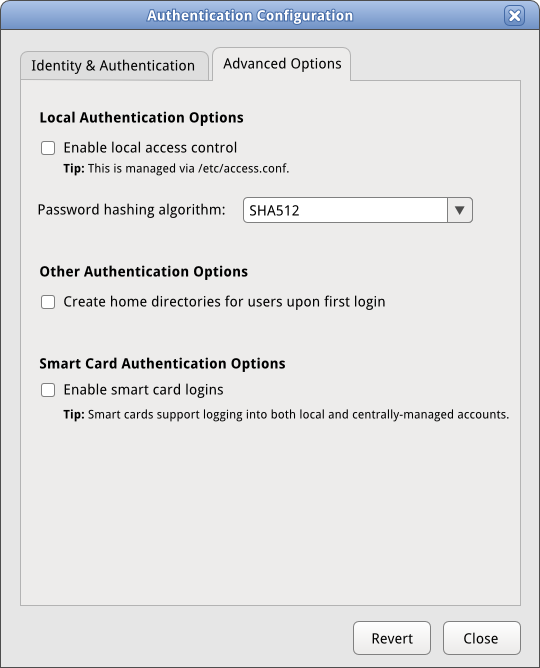 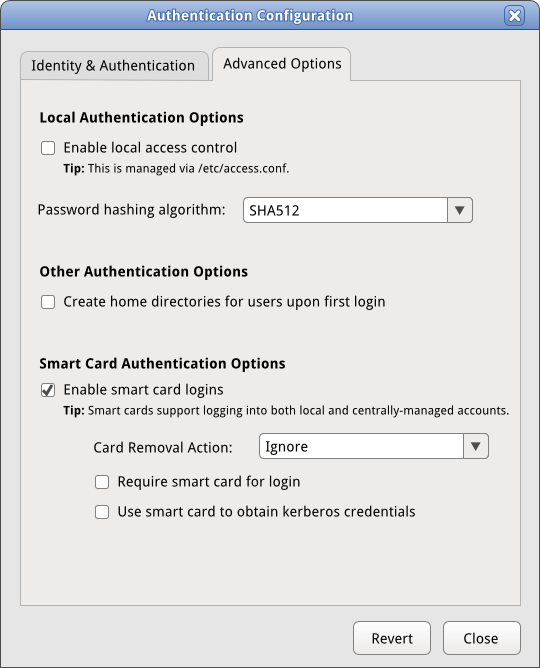