The overarching concept behind this proposal is as follows: To ensure Fedora (and its derivatives) provide a superb platform for constructing a software application from open source components, regardless of the open source programming language used to develop those components, or the open source packaging system used by the developers to publish them

To achieve this, it is proposed to explicitly split the software assembly process into the following stages:

The first three stages are new and collectively referred to as the "Software Component Pipeline". The final stage refers to what Fedora (and other Linux distributions) have long handled on behalf of their users (with commercial Linux distributions being able to sustainably fund more rigorous review and QA processes).

For each of these new stages, we aim to identify clear responsibilities and expectations for the Environments & Stacks working group and individual language SIGs in the provision of relevant software components to Fedora users. We also identify any online services specifically relevant to that stage.

This page also aims to provide the broader context for some of the ideas discussed in:

The initial iteration of the software component pipeline would be focused on the existing "upstream source format -> SRPM -> RPM" redistribution pipeline. Any components consumed using language specific tools or from cross platform ecosystems like Nix or Conda would still be consumed directly from upstream repositories, even if the package management tools themselves are provided as Fedora packages.

A possible sketch of that version of the pipeline is: 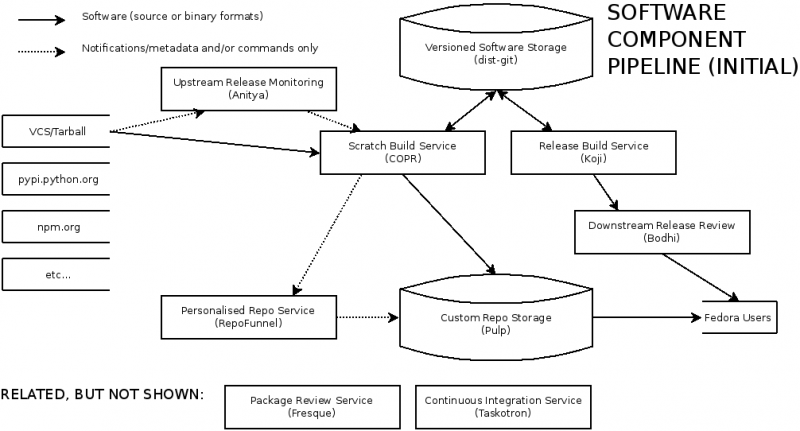 See https://github.com/ncoghlan/repofunnel/blob/master/docs/InitialFedoraPipeline.svg for the latest version of that sketch.

Projects to be added to the diagram:

Some possible future enhancements to the software component pipeline include:

A possible sketch of that version of the pipeline is: 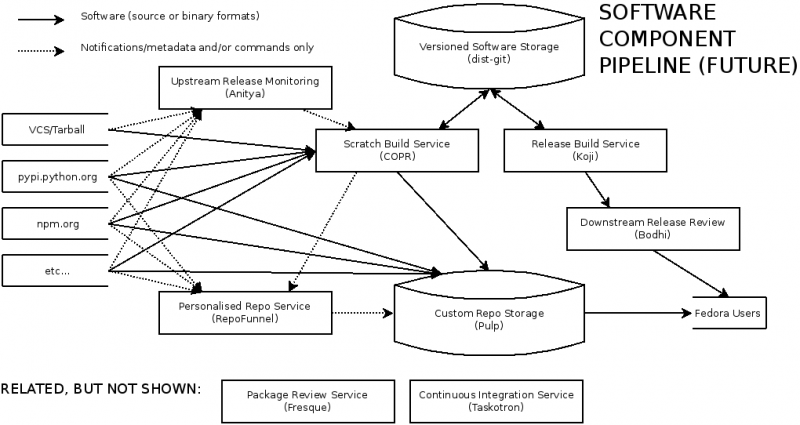 See https://github.com/ncoghlan/repofunnel/blob/master/docs/FedoraPipeline.svg for the latest version of that sketch.

For this stage, the primary responsibility of the Environments & Stacks working group would be to set appropriate expectations for the individual language SIGs.

Environments & Stacks would also be directly responsible for any language agnostic tools which Fedora may choose to provide to developers for use in this stage of development (e.g. Nix, Conda, Conary)

For upstream development and publication, it would be the responsibility of individual language SIGs to provide the following for at least Fedora, and potentially for EPEL (if SIG members are interested in that):

In addition to providing and maintaining these kinds of software components, individual language SIGs would be expected to oversee the following activities:

Optionally, individual language SIGs may also choose to provide alternate runtimes that seem particularly interesting to their communities (such as the PyPy interpreter for Python), and tools for choosing a "default" runtime on a per-user basis (without affecting operating system components written in that language)

NOTE: JavaScript/HTML/CSS (including Node.js) don't have their own language SIGs, but rather are bundled together into the web-devel sig: https://admin.fedoraproject.org/mailman/listinfo/web-devel

For this stage of development, the only relevant Fedora specific online service is the Developer Portal. Other Fedora services would be involved only as part of the package maintenance process.

The key goal of this step would be to get upstream software components readily available through COPR in a way which requires minimal ongoing effort on the part of package maintainers.

For this stage, the primary responsibilities of the Environments & Stacks working group would be to:

For this stage, the primary responsibilities of the individual language SIGs would be to:

Achieving the goals laid out for this stage would involve four key online services:

Anitya itself shouldn't need any changes, but COPR would need updates to track the links to Anitya monitored packages, and a new supporting service to trigger automated updates and rebuilds when upstream issues a new release.

The Fedora Review Service isn't a live project yet - Fresque exists, but I'm not aware of any currently active effort to get it into production. E&S would need to drive the process of getting that ready for use and deployed.

Rebase Helper is currently available as a command line tool, this would be about setting up a service to run that automatically and feed the results into COPR.

Other projects of potential interest

There are a number of things that could be done to improve Fedora's tracking of upstream projects just by finding ways to adopt and integrate tools already available elsewhere. In particular, ROSA Linux is an RPM-based distribution with a number of interesting automated analysis tools developed by Andrey Ponomarenko.

For this stage, the primary responsibilities of the Environments & Stacks working group would be to:

For this stage, the primary responsibilities of the individual language SIGs would be to provide guidance to developers on how to effectively use COPR and Taskotron for automated software CI.

Achieving the goals laid out for this stage would involve four key online services:

The impact on the first three was described in the E&S subsection above. RepoFunnel would be a new service that provided the ability to select a filtered subset of COPR repositories, create a corresponding downstream Pulp repo for them, and automate the process of keeping that repo updated when the query results changed. (I've started working on building a proof of concept for this part, since it's the key to making the whole idea practical)

This is the point where longstanding Fedora processes take over.

At this point, E&S hands over the reins to FESCo, Release Engineering and the Base WG to define policies and procedures. E&S involvement covers ensuring that the handover from RepoFunnel to dist-git is smooth, and preferably automated via Fresque.