The Container Resource feature allows the HA stack (Pacemaker + Corosync) residing on a host machine to extend management of resources into virtual guest instances (KVM/Linux Containers) through use of the pacemaker_remote service.

This feature is in response to the growing desire for high availability functionality to be extended outside of the host into virtual guest instances. Pacemaker is currently capable of managing virtual guests, meaning Pacemaker can start/stop/monitor/migrate virtual guests anywhere in the cluster, but Pacemaker has no ability to manage the resources that live within the virtual guests. At the moment these virtual guests are very much a black box to Pacemaker.

The Container Resources feature changes this by giving Pacemaker the ability to reach into the virtual guests and manage resources in the exact same way resources are managed on the host nodes. Ultimately this gives the HA stack the ability to manage resources across all the nodes in cluster as well as any virtual guests that reside within those cluster nodes. The key component that makes this functionality possible is the new pacemaker_remote service which allows pacemaker to integrate non-cluster nodes (remote-nodes not running corosynce+pacemaker) into the cluster. 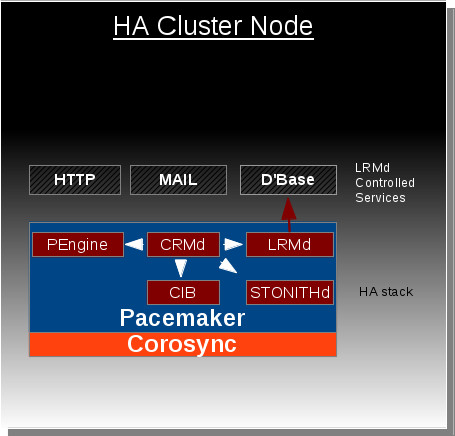 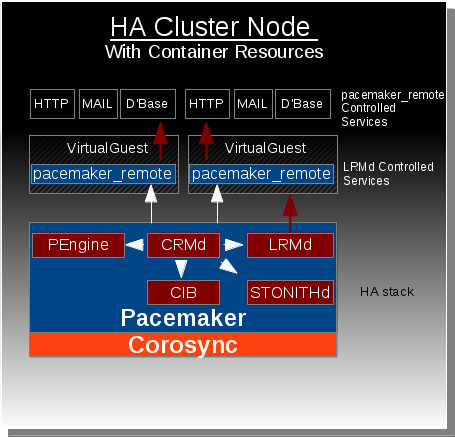 This feature expands our current high availability functionality to span across both physical bare-metal cluster nodes and the virtual environments that reside within those nodes. Without this feature, there is currently no direct approach for achieving this functionality.

The pacemaker_remote service is a modified version of Pacemaker's existing LRMD that allows for remote communication over tcp. This service also provides an interface for remote nodes to communicate with the connecting cluster node's internal components (cib, crmd, attrd, stonithd). TLS is used with PSK encryption/authentication to secure the connection between the pacemaker_remote's client and server. Cluster nodes integrate remote-nodes into the cluster by connecting to the remote-node's pacemaker_remote service.

The pcs management tool for pacemaker needs to support whatever configuration mechanism is settled upon for representing container resources in the CIB.

These are the high-level steps required to use this feature with kvm guests using libvirt. It is also possible to use this with libvirt-lxc guests, but since the required steps for getting this to work with linux containers are not as generic as the kvm case, this will focus on solely the kvm case for now.

Place the authkey file in the /etc/pacemaker/ folder on every cluster-node that is capable of running launching a kvm guest.

In this example the resource is called 'vm-guest1' which launches the kvm guest created in step 2. After the cluster node launches vm-guest1, it attempts to connect to that node's pacemaker_remote service using the hostname supplied in the remote-node meta-attribute. In this case pacemaker expects to be able to contact the hostname 'guest1' after the 'vm-guest1' resource launches. Once that connection is made, 'guest1' will become visible as a node capable of running resources when viewing the output of crm_mon.

Make sure that the resource id and the remote-node hostname are unique to one another. They cannot be the same. Below is an example of how to configure vm-guest1 as a Container Resource using pcs.

Run crm_mon to see where pacemaker launched the 'FAKE' resource. To force the resource to run on the 'guest1' node run this.

5. The kvm guest should now be able to run resources as just as if it was a cluster-node.

No new Pacemaker dependencies will be required for this feature. A list of the current dependencies can be found here. [1]

The part of the project surrounding researching and defining use-cases for Linux Containers in an HA environment runs the risk of being incomplete before Fedora 19. The Linux Container support required to achieve this goal is not well understood and may or may not be possible depending on the capabilities of libvirt-lxc and potentially systemd at the time of release. This outcome will not affect the release this feature however as the KVM use-case is well understood.