An application that reviews packages according to the Package Review Guidelines and generate a report. It also include automates all common steps which every reviewer performs for each review and building guideline checks for all Package guidelines which can be automated.

Review-o-matic is an application which will be a feature of the infrastructure. It will be provided as a hosted services and can also be set up locally.

Review-o-matic would be an application which takes a Spec or source RPM through its feeder and does a review and posts its report via its reporter interface. Feeder will have different interfaces to get input from Bugzilla or any generic URI. Similarly, reports can be provided as Bugzilla comments or as a local file. Our process also includes(very much obviously) running rpmlint on input files. We plan to push all guidelines checks to upstream rpmlint. But there are some hybrid checks which:

will need to be kept in review-o-matic.

(Check table) is were inspecting each checks one by one and decide on which are programmable and which are not, takes place.

Structural Architecture of whole design for now is: 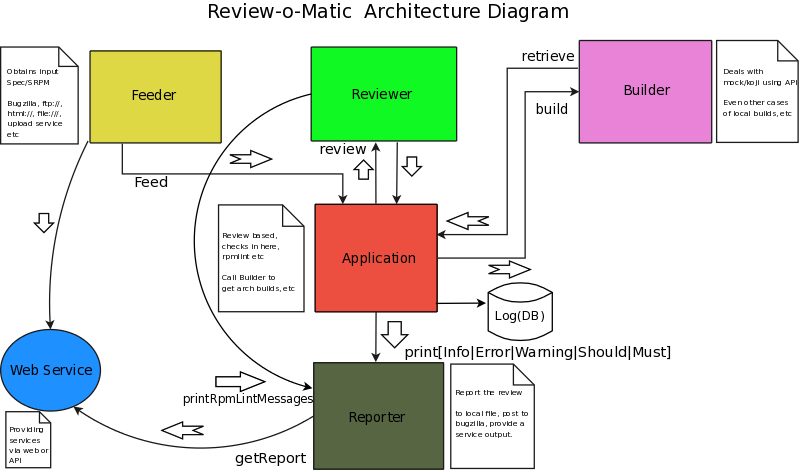 Fedora is known for setting high standards in RPM packaging. With a repository that is growing each day, and our emphasis on working upstream we have a collection of packages that makes us proud, our derived distributors happy and our competitors envious. However to maintain high standards we need to make sure that package review requests get the necessary time and attention to meet the large queue of new submissions.

Requires completing the structural design and writing checks or guideline programs for those packaging guidelines which can be automated.

What RoM is not ?