With all the new possible combinations of content (RPM packages, modules, Docker images, ...), it is no longer possible to require humans to for example remember to rebuild containers after they have built an RPM package intended for that container. There are just too many.

The goal of Freshmaker is to address this issue by automatically rebuilding the artifacts when their sources or dependencies get updated. This for example ensures that RPM packages in latest Docker image are always up to date or that modules gets automatically rebuilt after the change of their modulemd specification and can be automatically tested by the CI.

This sub-chapter describes the events which trigger the automatic rebuild of other artifacts by Freshmaker. It hence also describes the use-cases for Freshmaker. The use-cases can be summarized in the following chart. Full description of each part of a chart is written later in this subchapter. 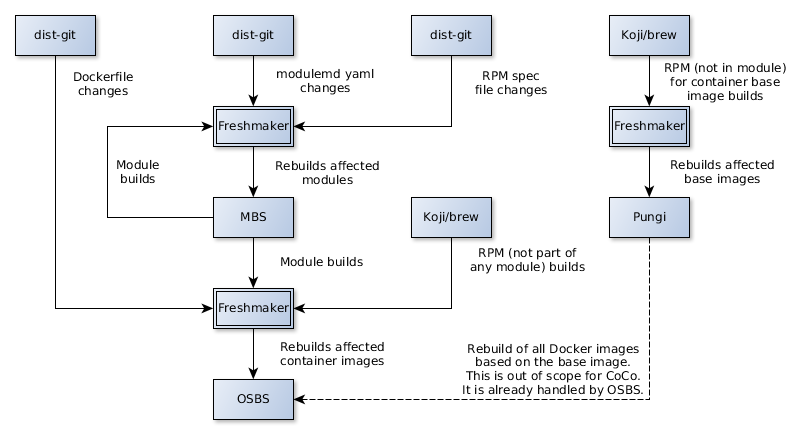 About the service sending the event

Although the chart and this subchapter mentions particular services which send and even to trigger the rebuilds, the real service sending the event to trigger the rebuild can be different. We will for example rebuild Docker image only when the updated module passes the tests. Therefore it is possible that the real service triggering the rebuild of a Docker image will be PolicyEngine or something similar handling the tests results, but the real cause of the rebuild is a module build and therefore we mention it as an service sending an event.

Just keep in mind that there might be multiple services on the road influencing whether and when Freshmaker sees the information about a particular artifact being built/updated.

Although we have the list of SRPMs from which the module is built in PDC, it is currently not possible to search them according to SRPM. We can only fetch particular modules and then list their SRPMs. However, for this use-case, we would need to list all modules containing the SRPM. This would have to be implemented in the PDC.

To rebuild the container images automatically, Freshmaker needs to auto-generate the Dockerfiles based on the built module. We should probably have one Dockerfile per module profile, although the PolicyEngine can influence that.

This is out of scope for Freshmaker. OSBS takes care of rebuilding layered container images when one of the layers changes.

Ralph’s comment: We don’t want to do this *every* time. It is too much. Maybe only trigger new composes when further conditions are met. Take this one on last after we’ve gained experience with the other triggers.

Deciding whether to rebuild or not

Quality: Freshmaker should certainly not rebuild all the artifacts all the time. There might be good reasons why not to do it, for example when the underlying artifact did not pass its tests. To decide whether Freshmaker should rebuild the upstream artifacts, it must query the PolicyEngine.

Iterative Enablement: We also need a way to turn this on slowly for different content types - in particular for container rebuilds. The system should allow a whitelist of patterns for container names that should be considered for this, so we can start out with only doing automated rebuilds of the sssd container. Once we’re happy that it is working well, we can expand the whitelist, or remove it all together to handle all containers.

Detecting Cycles: We need some way to detect cycles, to make sure we’re not in an infinite loop….

Handling Failures: Does Freshmaker care whether builds that it kicks off pass or fail? If it does care, what actions are taken?