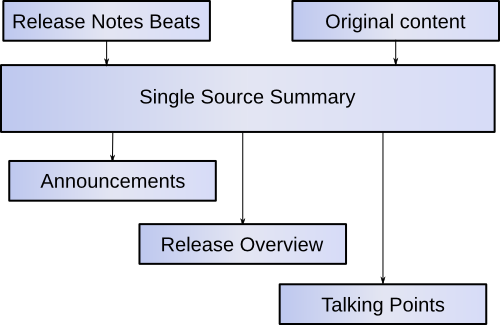 These are three to five short paragraphs of one to two sentences each. These are used by local teams to write up native-language announcements in a culturally appropriate manner. They need to be understood by non-native speakers, such as Ambassadors, who can use them to begin a conversation about the talking point in their native language with other users, etc.

Previous year examples are at Releases/TalkingPoints , which is similar to where the actual work will be references to locale teams. The eventual Releases/Ver./ReleaseAnnouncement/TalkingPoint needs to pull the actual talking points from here.

We have shortened the main thrust of what makes Fedora special to four fundamentals: "Features. Freedom. Friends. First." These aren't really useful for talking to the press, but they are useful to remind ourselves what makes a story meaningful in Fedora:

As Fedora contributors, one of the most exciting parts of the development process of new Fedora distributions is determining which cool, new features are included in the next release. Fedora 9 (Sulphur) is due out at the end of April 2008, and we started making plans for it as soon as we released Fedora 8 back in November. We’ve been implementing the changes we want included in this release, and with the Fedora 9 Alpha release today, it’s time for the whole community’s input. Obtain your Alpha live spin here.

During each Fedora cycle, there is an Alpha release, a Beta release and a series of weekly snapshot releases. The Alpha release gives everyone the opportunity to provide feedback on the work that has been done so far as the first step in the testing cycle. It’s the first time that the larger Fedora community can get really involved in testing out the new features and is encouraged to provide input on what’s working, and what’s not. It’s easy to gain access to the Alpha release because you don’t have to install any software — everything you need is provided through live CDs. Then, to give us feedback, you can file bug reports and enhancement requests and make other recommendations.

Alphabetical breakdown of the features listed at /Releases/*/FeatureList, divided between Desktop, Server and System, explaining: 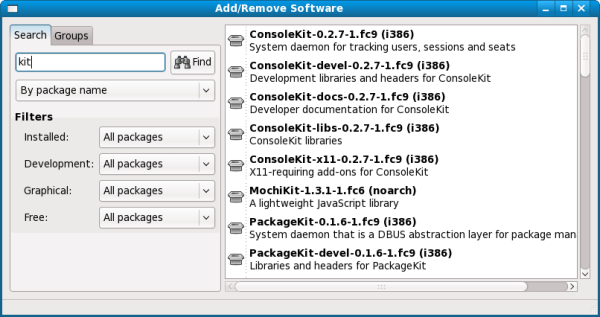 KDE Desktop 4.0.3 features upgrades to core components such as the port to Qt 4. It also introduces a number of brand new frameworks such as the Phonon, a multimedia API; Solid, a hardware integration framework; Plasma, a re-written desktop and panel with many new concepts; integrated desktop search; compositing as a feature of KWin; and a brand new visual style called Oxygen.

Thanks to the hard work of the Fedora KDE Special Interest Group , KDE 4.0 is well integrated in Fedora. As a result, KDE 4.0.x is the default for the KDE spin of Fedora, and includes compatibility packages to ensure that applications not yet ported to KDE 4 will continue to work.

Throughout the Fedora 9 life cycle, KDE will continue to receive a updates mirroring the latest from the upstream project. As a result, Fedora 9 will include KDE 4.1 when it is released in July of this year. 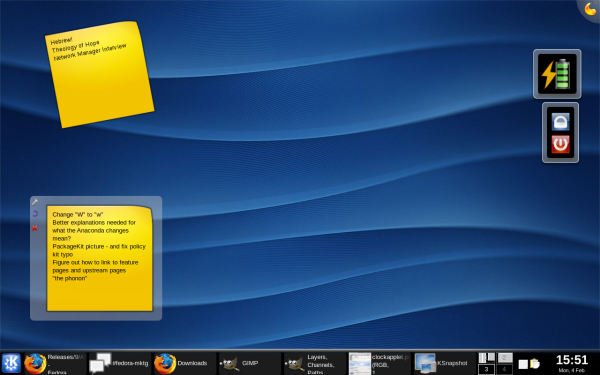 NetworkManager has made managing your network devices easy in Fedora. With this release, Fedora developer Dan Williams has aimed to expand the situations in which NetworkManager is useful. New features available in this release include: 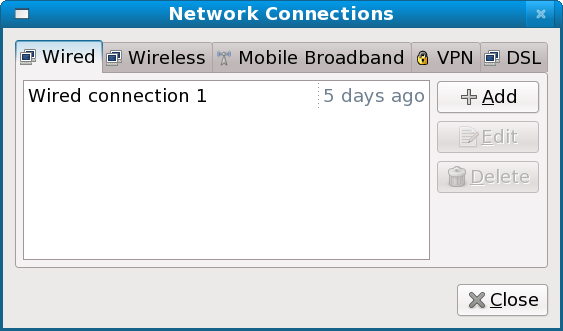 Firefox 3 Beta 5 brings a number of major improvements including a native look by using the same icons and widget style of the rest of the desktop.

Other improvements include the new awesome bar that is similar to the traditional address bar, but searches the full text of URLs and bookmarks as you type and allows single click bookmarking of web pages. Also, the entire bookmarking system has been re-worked in this release, allowing easier management through tags and a new interface. The browser engine, XULRunner is also now split from the user interface and applications built against the engine can rely on it as a stable platform. 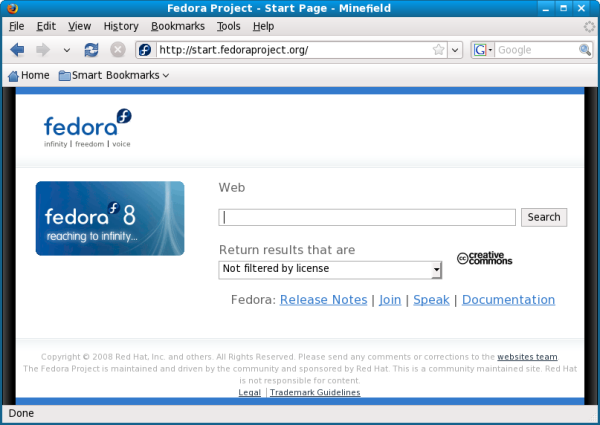 SELinux in Fedora 9 can optionally confine Web browser plugins such that the impact of security issues in plugins are nullified or very limited. DanielWalsh, primary Fedora SELinux developer has a blog post on this with more details.

OpenJDK6 which is the release of Sun Java SDK under a free and open source license is now available by default in this release. The minor non-free portions of OpenJDK have been replaced by bits from the IcedTea project. More Java programs should work out of the box as a result of this change. 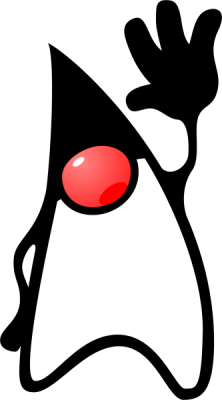 Startup and shut-down of X is just about a second and there are a number of other improvements including better display configuration and hot-plugging support thanks to the inclusion of Xorg 1.4 with a pre-release of X Server 1.5 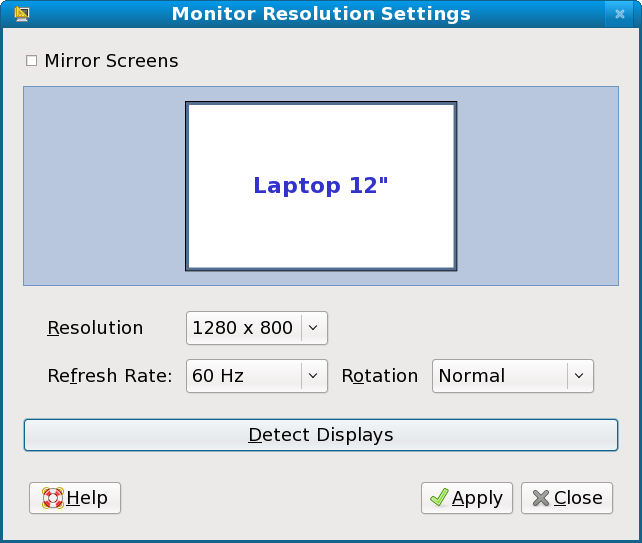 For some time, several Fedora applications, including OpenOffice.org, Firefox, Thunderbird, GNOME and KDE, have each had their own set of dictionaries. This situation was obviously not ideal, and unnecessarily increased resources like the size and memory footprint of Fedora releases. This problem is now fixed by consolidating all the dictionaries. This feature, which requires a number of changes to various software packages, is now almost complete and the benefits are already apparent in the Beta release.

More details and documentation can be found on the feature's wiki page .

There are a number of Bluetooth related enhancements that build upon the work already completed during Fedora 8 release. Sending, receiving and browsing files via Bluetooth is now much easier. Refer to this page for more details.

If you have been using a older release and looking for a easy way to upgrade to the latest one, wait no more. Fedora new features a preupgrade software tool that does a in-place upgrade to a new release of Fedora in a safe and easy way. You can upgrade from Fedora 7 to Fedora 8 and from Fedora 7 or 8 to Fedora 9 release using this tool. Refer to PreUpgrade page for more details. 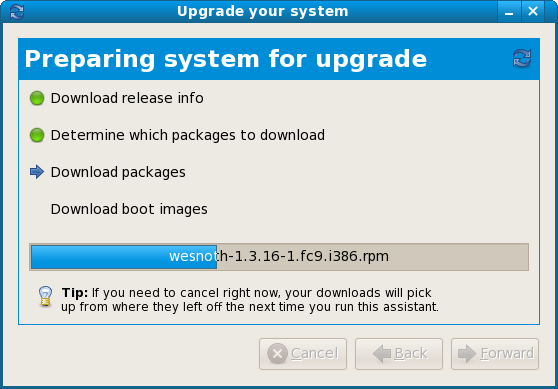 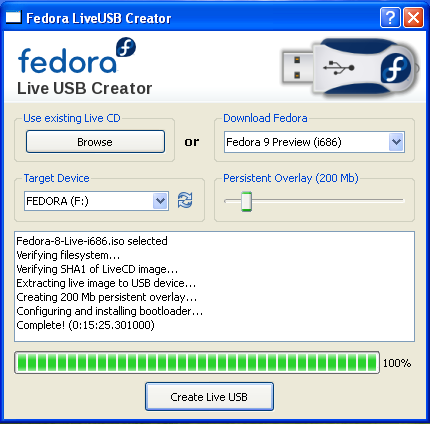 FreeIPA makes managing auditing, identity and policy processes easier by providing web-based and command line provisioning and administration tools that takes the pain away from system administration. It combines the power of the Fedora Directory Server with FreeRADIUS, MIT Kerberos, NTP and DNS to provide an easy, out of the box solution.

Fedora 9 uses the Upstart init daemon as a replacement for System V init. The benefit of this is that Upstart has a more sophisticated idea of how to to trigger and manage services. For Fedora this is particularly useful as it will help us to improve our boot and shutdown processes, streamlining a lot of what currently happens.

All current init scripts should run without errors. However, any customizations to /etc/inittab (except initdefault) will need to be ported to upstart. For information on how to do so, please see the Upstart Getting Started Guide .

Virtualization in Fedora 9, as with many of our previous releases, has received some significant new features and improvements. The information available here is a brief summary, to find more information about these features visit the feature list .

Fedora 9 features experimental support for the new Ext4 filesystem. List of enhancements include:

There are many core toolchain changes including a move to a brand new GCC 4.3 as the system compiler the entire distribution has been built against a a major new version of Perl 5.10.

TexLive has replace the aging and unmaintained tetex release. TeXLive is actively developed and modern TeX formatting system which is widely used for typesetting, scientific and presentation purposes.

During the Fedora 8 release cycle, Fedora got a new Font Special Interest Group. Working exclusively to ensure that our packaged fonts meet with our own standards with respect to free software, and cater to as many languages as possible, they have been busy reviewing and packaging new fonts for Fedora 9. There's much more work still to be done, but below is a brief summary of what has been achieved so far:

Full copy of the release notes?

Docs/Beats is the rawhide notes.

Below here page that is jumbled with ideas waiting for us all to sort it out.

Quick highlights of the release; two paragraphs and one list of seven to twelve items. Alternately, one list of five major highlights, then a long list of all features in alpha-order. f-marketing-list decides the top items per release.

Release Notes snips from the Release Summary to the end.

Press kit snips from this Release Summary only.

Release/#/Summary snips from Release Summary to the end.

Each of the below sections can be snipped for various SIG specific needs.

Could be one per SIG or one per functional category or ... f-marketing-l to decide?

You can find a tour filled with pictures and videos of this exciting new release at Tours/Fedora9.

This release includes significant new versions of many key components and technologies. The following sections provide a brief overview of major changes from the last release of Fedora.

Fedora includes several different spins , which are variations of Fedora built from a specific set of software packages. Each spin has a combination of software to meet the requirements of a specific kind of end user. In addition to a boot.iso image for network installation, users have the following spin choices:

More custom spins are available at http://spins.fedoraproject.org . These Live images can be used on USB media via the livecd-iso-to-disk utility available in the livecd-tools package.

Fedora releases are also available via Jigdo. This distribution method can improve the speed of obtaining the installation ISO images. Instead of waiting for torrent downloads to complete, Jigdo seeks the fastest mirrors it can find via the Fedora Project Mirror Manager infrastructure, and downloads the bits it needs from these mirrors. To optimize seeking these bits, you can tell Jigdo to scan a DVD or CD you already have, and cut down on redundant downloads. This feature becomes particularly useful if you:

The proposed plans for the next release of Fedora are available at RoadMap.

This is a template. We will have more complete information during Fedora 9 Release. Do check again later.

The Fedora 9 release summary provides a quick overview of the major new features in this release. Why not download and enjoy this great combination of the latest and most robust free and open source software available. Enjoy your freedom!

You can find a lot more information about many new features in Fedora 9 from the individual developers at Interviews.

This needs to be ready far in advance and translated.

This footer needs to stand alone and be useful without any leading in material in case it is the only translated content a user is able to read.

Straw man below pulled and updated from Fedora 8 announcement footer.

For a summary, visit: Releases/9/ReleaseSummary

To find ways you can help and participate, visit: http://fedoraproject.org/join-fedora