Difference between revisions of "Fedora Insight"

Fedora Insight aims to provide a central location through which we can disseminate information about the Fedora community. By providing a central location, we hope to increase collaboration between teams who are currently producing relevant content, as well as reducing duplicated effort, and to make it easier for those who wish to keep up with the goings on of the community without following a dozen different blogs and mailing lists. With this in mind, the content created by Fedora Insight should appeal to users, developers and journalists, take a number of different forms --- including interviews, feature length articles, news reports etc --- and a number of different mediums --- including podcasts, written text and video.

Our current next step is to pick a platform. To achieve this, we need to:

If you make a Fedora Insight-related page, please add [[Category:Project Fedora Insight]] to the bottom for now, so we can properly tag things. This category will be renamed after we pick a better name for Fedora Insight.

For the F11 release cycle, Marketing switched from a task-based model to a schedule based model. This went well, allowing us to keep better in sync with what was going on and what types of information were needed to be created/put out at any given point in the cycle. However, there are still many kinks and areas for improvement as were defined in document: F11 Cycle Retrospect. Bottom line, complacency is not a formula for success and we must always be looking towards the future and improving it.

Looking forward, we have always floated the idea of having a Fedora Magazine and the going logic is that we may be able to model Fedora Marketing around such conventions which would not be dissimilar to a magazine. The focus would be not only on producing the content that is required for each release cycle but also on producing relevant and interesting content, in many forms, audio, video and text-based for the consumption of both the general Fedora community and the Open Source community at large.

below are the notes I took at the first Fedora Insight meeting I know of, which was in the red hat westford office at the start of june. Mel Chua 12:37, 25 July 2009 (UTC)

Currently, the state of project/community produced content is clearly scattered. We have many groups, such as Marketing, Ambassadors, Docs, Design, etc. all creating great content for a variety of different purposes. The amount of this content is effectively multiplied by how much we care to and/or use the services of the translation team to localize this content. Once this is done, there are various and sundry methods of distributing this content. We have Fedora Weekly News, Docs Beats, Fedora Planet, local ambassadors newsletters etc. There is not one central process or policy for creating content and distribution channel/plan. Also, much of our content is not clearly licensed.

Much of this content is also centered milestones and it may be possible to fit it into recurring schedule-based publication which would help overall management and tracking.

There are many questions to ask. What do we want this to be? Who should the audience be? How well do we actually know our audience to make that assumption? What types of content? These questions are what we are trying to ask and answer now so we can get a solid picture of how we proceed further. We need to clearly answer these questions to clarify our goals. Goals are in the goals section below and they will and should be refined by the community as a whole.

We might want to strive for something akin to a journal style format for community created/relevant content and including Fedora Marketing content might work best. We should start by investigating sites with similar goals/audiences. We look at sites like https://wiki.ubuntu.com/UbuntuWeeklyNewsletter, http://fullcirclemagazine.org/, http://planet.laptop.org/, http://www.olpcnews.com/, http://planet.sugarlabs.org/ -- not to mention FWN/LatestIssue.

What we want might be a magazine, which is not really a magazine format, more journal-ish (technical, non-nephyte) but also not afraid to include some stuff for newbies, and mostly a platform where interesting content would show up for the community's consumption, which would act as a central hub.

Also, the goal should be to create something which is well laid out visually and consistent with the design teams work and general philosophy.

There are too many avenues to information now, its innundating. Blogs/Planet, FWN, Ambassadors own work, etc. Also, a majority of this content is text, whereas we would like to make more multimedia content.

Well established guidelines for what needs to be produced/is being worked and when it must be published by.

This also helps in running a proper marketing campaign.

Better able to target an audience

Process for getting things in Translation Queue.

Better plan with regard to something like NDN. Red Hat Intl PR is part of this

this is a draft, for discussion - please edit!

these are drafts, for discussion - they were taken mostly from Planet headlines on the day we looked (at the beginning of June). Please add/remove/edit/comment - what do you think should be here? Mel Chua 12:38, 25 July 2009 (UTC)

to be filled in by ianweller

This is a brainstorm list - what would you want a Fedora Insight platform to have and do? Please add to the list below.

This is a brainstorm list; add your ideas and notes on various platforms below. Platforms are in alphabetical order. 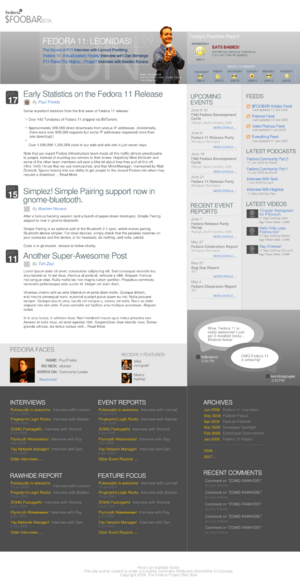