This page documents common bugs in Fedora 8 and, if available, fixes or workarounds for these problems. If you find your problem in this page, do not file a bug for it. Where appropriate, a reference to the current bug(s) in Bugzilla is included.

With the alpha release of Fedora 9 comes the Bugs/F9Common page.

My Bug Is Not Listed

Not every bug is listed in this page. You can use bugzilla queries in the bottom of this page for that. We have collected this based on commonly discussed issues in our mailing lists and forums. If you believe any particular bug report is missed out here and if you have wiki access, add it this page or contact RahulSundaram with the bugzilla report number explaining why you believe that particular report qualifies as a common issue.

Sound does not play when resuming

After resume from suspend/hibernate or after VT switches hal has a (probably race-condition) bug that causes it not to restore ACLs on devices properly. Quick workaround is to switch between text console and x11 once or a couple of times. If that comes annoying you can still not let hal manage the rights, but add your udev rules. See Bug 384271 .

There appears to be an issue between ISOLINUX and certain BIOSes where the USB keyboard does not work at the boot menu. This can be worked around by holding down the "shift" key during bootup to force the bootloader into text mode.

Bug 239585 - On certain systems, the CD/DVD may hang during boot with message "Ready". Most of the bugs that caused this are thought to be fixed, though on some systems adding "edd=skipmbr" to the kernel command line, works around this issue.

Users with packages installed from other repositories can have their upgrade hang while resolving dependencies for the upgrade. Rebooting at this point is safe and will not leave your system in an inconsistent state. An update image is available for the problem at http://katzj.fedorapeople.org/updates-f8-yumloop.img. There are three ways to use this image:

To confirm that the fix is in effect, you can switch to tty2 and ensure that there are files in /tmp/updates.

New CD boot images (boot.iso) will be available in the near future with the fix for this integrated and will then be linked here.

Bug 254144 Fedora 8 includes IcedTea , a free and open source derivative of OpenJDK. Users trying to install Sun Java might run across a bug with the Sun JVM that makes it incompatible with the newer libX11 included in Fedora 8. Workaround is documented . We highly recommend using !IcedTea instead. Bug 390261 is also related.

Suspend option in the menu has been deliberately disabled in this release on systems with Nvidia cards since the default "nv" Xorg driver from Nvidia has a number of problems in handling of suspend and resume correctly. If you wish to override this default, add a file that contains ALLOW_NV_SUSPEND="yes" under /etc/pm/config.d

Bug 319071 If you have the Intel 3945 wireless chipset, you may experience trouble finding and associating with wireless networks in NetworkManager. Try adding

Bug 344611 You are keep getting annoying prompt for default keyring to unlock over and over whenever you login or use NetworkManager. See

Cannot start ssh: Service will not start after installation of the x86_64 version

Bug 381721 - In a fresh F8 DVD install, you might see Package Updater (PUP) is asking to insert CD when you launch it for the first time. As a work-around, click on Repository Manager and uncheck "Install Media". See a 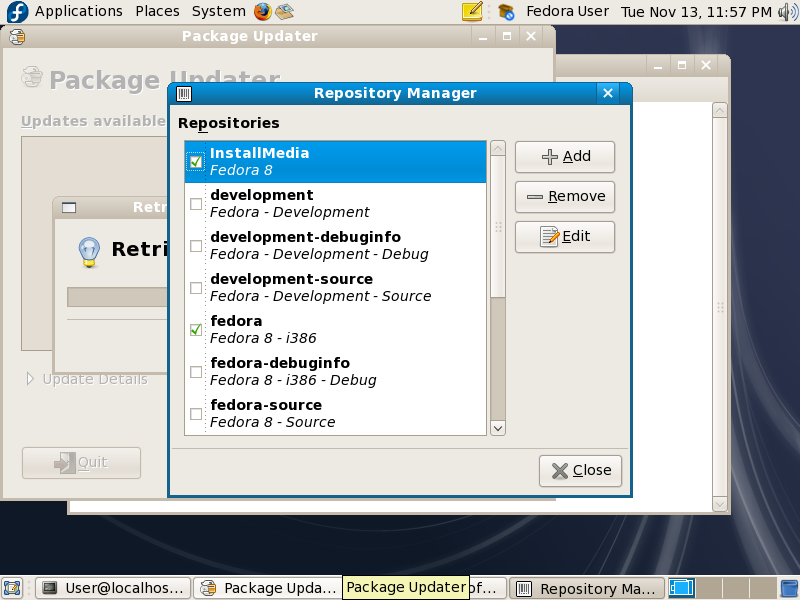 Using boot.iso the install hangs during the initial boot at the following:

to the kernel line.

Installer fails on i586 hardware

Bug 367731 - Anaconda fails on Via VPSD motherboard and other i586 hardware such as Pentium processors, and AMD-K6 2.

Bug 361041 - yelp (the GNOME Help Browser) may crash when you use its search box. This happens on systems where virt-manager is installed, due to a bug exposed by a bad help file in the virt-manager package. Bug 361071 tracks the bad help file.

USB Drives Cause Install to Fail

Bug 466106 - USB drives that are attached to the system and powered up may cause the install to fail. If possible power down the device, remove it and restart the installation. Once the system is updated the device(s) will work properly.

Partition table claimed to be invalid on previously working drive

Bug 241288 - Prior to Fedora 7, the host protected area of hard drives was often ignored and formatted as usable drive space. Starting with Fedora 7 and the new libata driver subsystem, the host protected area is respected by default. As a result, its possible the Fedora 8 kernels will believe your drive has a partition that extends off the end of the disk, as the sectors of the hpa are masked out. The work-around to upgrade such systems is to pass the module parameter 'libata.ignore_hpa=1' when booting the installer. For example, when booting the installer cd, boot with:

Those upgrading from FC6 or earlier via yum on impacted systems can add a line to modprobe.conf along these same lines to allow an F8 kernel to boot their system. Ex:

Fedora 8 uses HAL and !ConsoleKit to manage permissions on the sound devices. If you have disabled the !ConsoleKit service or you use a login manager that is not !ConsoleKit-aware then you will have to set the permissions manually.

Bug 228079 - wdm needs to use !ConsoleKit
Bug 228110 - Main HAL/!ConsoleKit bug. Contains a technical discussion about some of the reasons for using !ConsoleKit to manage consoles.