This page was last edited on 22 January 2010, at 11:40.
From Fedora Project Wiki
File:FedoraEvents Header EventN1.png 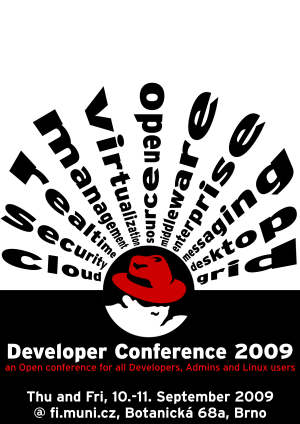 Language
Presentations are now labelled with the language in which the talk will be given. The (cz/en) label means, that preferred language is Czech, but if there will be more English speaking people in the session the presenter is able to switch to English.

Watt hunting competition
.. is a programming competition in which the goal is to program several tasks faster and better optimized than others (use less cpu-time, disc access, ...). There will be nice prizes for best programmers!

Hands-on labs
The lab will be equipped with 10 workstations and Wi-fi AP. Some of the session will be limited to 10 people only.

There are several airports around Brno; http://whichbudget.com can be used to see which budget airlines operate flights to a destination; for your convenience, the airport names below are linked there; http://skyscanner.net can help you finding non-direct connections. For information about booking the train or bus tickets, follow the links in the rightmost column.

Note: the times include the time needed to get from the airport to the railway or bus station.

There are no relevant return discounts for trains, and the budget airlines often offer no return discount as well, so there is little incentive to use the same airport for both direction. Thus it might be a good idea, for example, to visit Vienna during your return journey; for details, see Vienna -> Brno.

Posters in high-res are avaliable from http://rvokal.fedorapeople.org/devconf/