Phnom Penh, at the confluence of the Mekong and the Tonle Sap Rivers, is the capital of Cambodia and its largest city. The beauty that made it a 'Paris of the East' before 1970 is unfortunately well hidden, though there are a few French colonial buildings remaining. The wide boulevards and promenades envisaged by the French have become parking spaces and market stalls: pedestrians are not in favour. The most pleasant strolling is to be done along the park-like river frontage, which hosts cafés and restaurants aplenty. Phnom Penh is on its best ways to become again the Pearl of South East Asia.

We plan to host FUDCon together with BarCamp Phnom Penh (http://barcampphnompenh.org), which usually gathers more than 3.500 tech-interested people.

BarCamp Phnom Penh is an international, innovative, and open technology conference. It’s for individuals, businesses, and non-profit organisations. This two-day gathering at Institute of Technology of Cambodia (សាលាតិចណូ) is aimed at computer enthusiasts, Internet users, technologists, entrepreneurs, digital journalists, web developers and netizens to share and learn all things technology in a very open and democratic environment. BarCamp consists of 10 paralell tracks with fixed talks on the fist day, second day is unconference style and the schedule is putted together during the BarCamp. You are invited to also submit talks to the BarCamp Schedule. The Schedule for BarCamp Phnom Penh 2014 edition, you can find here

The team gets supported from all of the BarCamp organizers as well their volunteers. The team has expieriences in organizing larger tech-oriented conferences, they organize not only BarCamp Phnom Penh as all the other BarCamp events in Cambodia and this since 2008.

How to get there: 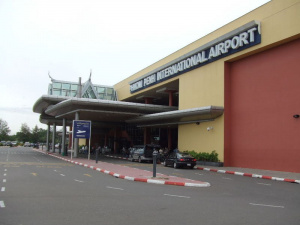 Prices from selected airports, booked 6 weeks in advance, round trip,

All visitors, except citizens of Indonesia, Malaysia, Singapore, Philippines, Laos, Thailand and Vietnam need a visa to enter Cambodia. Visas can be obtained at Cambodian embassies or consulates. Visas are also available "on arrival" at both international airports, all six international border crossings with Thailand, some international border crossings with Vietnam, and at the main border crossing with Laos.
You will need a visa type T, which will cost 30 US$. Visa are also available as so called e-visa - https://www.evisa.gov.kh/ which you can get via internet in advance.
Only citizens of the following countries have to apply for a visa in advance: Afghanistan, Algeria, Arab Saudi, Bangladesh, Iran, Iraq, Pakistan, Sri Lanka, Sudan, Nigeria.
for more information consult the pages of the Cambodian Tourism Ministery

Phnom Penh has a wide variety of accommodation, ranging from budget guesthouses (about USD5-20) to good quality mid-range hotels (US$20-50) to extravagant palaces with extravagant prices to match.

cheaper rates for booking more as one room, can be arranged. All of the proposed hotels are equipped with wireless internet

Cheap SIM cards from $2 for GSM phones are available on almost any major street. A vendor should have an activated test card to be used to make sure your phone will operate on that network. Calls between mobile networks can be spotty and Skype calls from abroad to mobiles in Cambodia are sometimes dropped, so be prepared to redial frequently. SIM cards, phone credit and internet packages can be bought and activated at the airport located just after passing through customs. A great time and place to do so if you know you going to buy a local sim card in Cambodia. Its a good idea to have your phone sim unlocked before leaving home. It seems all phones sold in Cambodia are unlocked. Dual sim phones are cheaply available which are useful for travellers who want to use their home sim card and a local sim card at the same time.
Mobitel and metfone have the best coverage around the whole of Cambodia. Metfone is particularly good for their internet packages (e.g. 2.5Gb for one month for $5) and they allow hotspot tethering from you smart phone unlike Mobitel. Useful if you use a laptop a lot and want to use wifi via your hotspot enabled smart phone.
Most of the major networks, such as metfone, have kiosks at the Phnom Penh airport located just after walking through customs where you can buy a local sim card, some credit and an Internet data package. If so, check that it all appears to be operating OK before heading off, such as by loading up a web page and checking your balance. If you fly with Bangkok Airways, they will give you an SIM card on board, you only have to activate it with an registration when you leave the plane.

Voltage: 230 V; Plugs A & C* (Sa lot of outlets are a combination of type A and C and can accept either type plug. Plug G may be found in some hotels.) You will need a voltage converter, and plug adapter in order to use U.S. appliances. We recommend getting a universal adapter and converter kit.

Cambodia uses three kind of currency, the Riel its own currency, which is mainly used to pay smaller sums (under 1 US$), the US$ which is mainly used (1 US$ = 4.000~4.500 Riel) and also in the nothern part the Bath from Thailand is used. Credit cards are not widely used, mainly in the good hotels and restaurant but you can use them in banks to get cash in advance for a small fee. ATM from ANZ and Canadia bank are widely spreaded and pay out in US$.

Phnom Penh International Airport 1 (IATA: PNH) - airport is around 7km outside Phnom Penh city centre, costs for an tuk tuk are around 7 US$, for an cab 9 US$. At night the prices are a little bit higher. 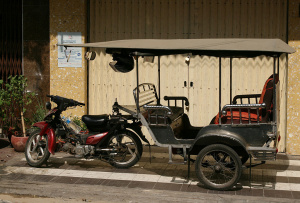 There is no public transport in Phnom Penh, this is mostly done by Taxis,Motorbike-taxis and tuk tuk Taxis forget about them,through the chaotic traffic situation they are slower as a tuk tuk and also more expensive. There are some metered taxis available but still some un-metered are running, fares must be agreed in advance. Motorbike-taxis, (motodops or simply motos) should take you anywhere cheaply. A trip from Sisowath Quay to Central Market costs about 2,000 Riel (US$ 0.50). Fares are higher at night and with more than one passenger. Often little English is spoken. No helmets are provided. some rules for tuk tuk

Agree a fare in advance. Be clear whether it is for one way or return and in total or per person. Drivers will try to avoid losing face by not admitting ignorance. Therefore, "Do you know where this address is?" will always be answered by "yes". Put it to the test and show a driver a recipe, while claiming it's an address. Be patient and expect the driver to pull over mid-trip to ask passers-by for directions even to the most obvious of destinations. Don't leave possessions exposed to snatchers. Women are often targeted. The tuk-tuk drivers outside the Foreign Correspondent's Club are notoriously pushy and aggressive. Avoid them: walk half a block and hire someone else. If you don't want a lift saying "no thanks" generally works. Better still, try it in Khmer: "otday awkunh". Have small Dollar bills, bigger notes they can not often exchange large notes

For arrival and departure days we will arrange an fetch-up service from the airport, we will rent tuk tuk day-wise for that as that might become cheaper, a tuk tuk rented for a day costs around 20 US$

Phnom Penh has a tropical wet and dry climate. The climate is hot year-round with only minor variations. Temperatures typically range from 22 to 35 °C (72 to 95 °F) and weather is subject to the tropical monsoons. The southwest monsoon blows inland bringing moisture-laden winds from the Gulf of Thailand and Indian Ocean from May to October. The northeast monsoon ushers in the dry season, which lasts from November to March. The city experiences the heaviest precipitation from September to October with the driest period in January and February.
The city has two distinct seasons. The rainy season, which runs from May to October, sees high temperatures accompanied by high humidity. The dry season lasts from November to April when temperatures can drop to 22 °C (72 °F). But temperatures can approach 40 °C (104 °F) in April. The best months to visit the city are November to February when temperatures, humidity and rainfall are lower.

Phnom Penh offers some interesting culinary treats not found elsewhere in the country. These include French-influenced dining and Thai, Vietnamese, and Indonesian dishes. Khmer street restaurant are also found throughout the city, where a typical meal costs 2-4 Dollars. Pizzas, banana pancakes and fried rice are always easy to find. The riverfront hosts everything from stand-up stalls to fine French bistros. If you have time try an tradional khmer BBQ, its available for around 5 US$ all-you-can-eat.

Be aware not all of the streets are lighted in the night, you should avoid walking in them at night.

BarCamp Phnom Penh has on saturday morning their opening remark (08:30-09:30) in the largest room (2.500), we are invited to join this opening ceremony. We will have a big hall (400 people) for our keynote in the afternoon. We will use this hall as our own dedicated room for our sessions. All rooms are equipped with projectors and wifi is available on the whole ground of ITC.

Have a view around the ITC buildings here

We calculate with around 100 participants for FUDCon

We spoke with Ezecom and Sabay and they might sponsor us.