In other languages: English (en) italiano (it) [edit]

GNOME has been regularly updated in rawhide / the F15 branch. dconf, gtk3 and yelp-xsl and other new components are in rawhide. The dbus a11y stack is now the default. gtk3 modules have been added for at-spi2-atk, PackageKit and gtk-themes-standard. The GNOME 3 visual appearance is being defined in the new theme packages gnome-icon-theme-symbolic and gnome-themes-standard. The first Fedora 15 GNOME 3 test day has happened on February 3. The second Fedora 15 GNOME 3 test day has happened on March 10. NetworkManager 0.9 and dependencies are entering updates-testing on March 25.

As of April 4, most of the final GNOME 3.0 releases have been built in koji and filed in bodhi.

GNOME 3 is the next major version of the GNOME desktop. After many years of a largely unchanged GNOME 2.x experience, GNOME 3 brings a fresh look and feel with gnome-shell. There are also many changes under the surfaces, like the move from CORBA-based technologies such as GConf, Bonobo and at-spi to dbus-based successors.

The user experience of GNOME 3 is largely defined by gnome-shell, which is a compositing window manager and desktop shell. It replaces the GNOME 2 desktop shell, which consisted of metacity, gnome-panel, notification-daemon and nautilus.

Apart from pure window management, gnome-shell provides the top bar on the screen, which hosts the 'system status' area in the top right, a clock in the center, and a hot corner that switches to the so-called 'overview' mode, which provides easy access to applications and windows (and in the future, documents).

In gnome-shell, notifications are displayed in the 'messaging area' which is an automatically hiding bar at the bottom of the screen. This is also where integrated chat functionality is provided.

gnome-shell also takes over the job of displaying system-modal dialogs that are perceived as 'coming from the system' (as opposed to application-specific dialog), such as logout, PolicyKit authentication, etc.

Since the requirements of gnome-shell on the graphics system may not be met by certain hardware / driver combinations, GNOME 3 also support a 'fallback mode' in which we run gnome-panel, metacity and notification-daemon instead of gnome-shell. Note that this mode is not a 'Classic GNOME' mode; the panel configuration will be adjusted to be similar to the shell.

The fallback will be handled automatically by gnome-session, which will detect insufficient graphics capabilities and run a different session.

Fedora stays in sync with upstream, and gains a modern user experience. Some long-standing problems with the CORBA-based accessibility stack will hopefully be solved as a side-effect of the move to D-Bus

A successful GNOME 3 and Fedora 15 release does include:

A successful GNOME 3 release does not include:

How to test basic gnome-shell functionality

How to test control-center functionality

How to test the accessibility stack

How to test fallback due to unsupported hardware

How to test forced fallback

How to test multi-monitor functionality

The user experience (on supported hardware) will be defined by gnome-shell. If graphics hardware (and/or drivers) do not support gnome-shell, GNOME 3 starts in a 'fallback mode' where we run gnome-panel and metacity instead of gnome-shell. Note that this is not a 'GNOME 2' mode, the panel configuration will be adjusted to give a similar look-and-feel to the shell.

In GNOME 3, nautilus is no longer part of the desktop shell, but just a regular application, and it is no longer started by default.

Accessibility tools will work as well as (or hopefully better than) they used to. The onscreen keyboard will no longer be gok, but caribou, which may offer a slightly different user experience. 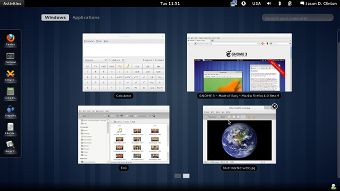 If gnome-shell is not complete or stable enough, keep it experimental and use the 'fallback mode'. If there are problems with certain combinations of graphics hardware and drivers, use gnome-shell only on known good combinations, and use fallback mode everywhere else.

If the dbus-based accessibility stack is not sufficiently functional, we switch back to the CORBA-based stack.

Applications can be ported from GConf to dconf and from gtk2 to gtk3 one-by-one, so if the porting work is not complete (and it is very unlikely that it will be), we can just ship with some applications using the new technology, while others still use the old one.

When is the upstream decision made as to whether 2.91.x will become 3.0?
See http://live.gnome.org/action/edit/TwoPointNinetyone/ for the schedule

How is the upstream decision made as to whether 2.91.x will become 3.0? Is it dependent on blocker bug resolution, or release criteria?
Release readiness is monitored by the release team, based on information from various sources such as weekly blocker bug summaries (http://mail.gnome.org/archives/desktop-devel-list/2011-January/msg00170.html), buildability (http://build.gnome.org), etc. There are no fixed criteria.

If GNOME 3 isn't considered ready by upstream, how will Fedora proceed?
There are various options, of which the third one seems the most realistic one:

Where can I find GNOME 3 marketing plans for upstream GNOME and Fedora?
http://www.gnome3.org is the new GNOME 3 website
http://live.gnome.org/GnomeMarketing/ThreePointZero has marketing plans

What testing (GNOME and Fedora) is planned for GNOME 3?
For GNOME development releases, see the schedule at http://live.gnome.org/action/edit/TwoPointNinetyone/. These get smoke-tested by the release-team and get some community testing as well. A considerable amount of testing comes in the form of having GNOME development versions in rawhide (currently 2.91.5). There are several Fedora test events scheduled to test various aspects of GNOME 3 (see QA/Fedora_15_test_days)

What happened to the Fedora 14-vintage GNOME shell favorites sidebar allowing selection+presentation of favorite applications and folders?
it was just an experiment that did not work out; it is not part of the final GNOME 3 design

How should multi-monitor support behave with GnomeShell in Fedora 15?
Currently, gnome-shell just treats any additional monitors as extra space to put windows in but otherwise more or less ignores them. When you go into overview mode, it only takes effect on one screen, the others are just left blank. There's nothing yet done to integrate the workspace model the Shell encourages with multi-monitor setups. There's a bug for this, but again, AFAICT no particular commitment to fixing it up before the 3.0 release. (This isn't actually much of a 'regression' compared to GNOME 2, which was similarly lax about doing much with extra screens, but it's the sort of thing people might expect GNOME 3 to have fixed).

There are some ways in which multi-monitor support is better in GNOME3 than in 2.x:
* On the secondary monitor, dragging the window to the top edge maximizes
* We have working configuration for primary monitors in the control-center display panel
* We are also hoping to have working barriers in X soon, so that we can improve the situation when the 'hot corner' is at a shared edge. Barriers have been promised for F15.

See Alex' blog post for an update on improved multi-monitor support in GNOME 2.91.92.

What happened to applets ?
Traditional gnome-panel applets are not supported in gnome-shell. The general design of GNOME 3 puts a lot more emphasis on full applications, instead of squeezing too much into a small strip or space at the edge of your screen. There are however, people working on adding an extension mechanism (similar to firefox extensions) to the shell; the code lives in http://git.gnome.org/browse/gnome-shell-extensions . We don't expect this to be available in polished or packaged form for GNOME 3.0, though.
Any existing applets that have adapted to use libpanel-applet-3.0 will be available in fallback mode. However, fallback is not considered the default mode of operation and will not be actively developed in the future. For more information on applets and transitioning to gnome-shell, see http://live.gnome.org/GnomeShell/AppletsTransition

Is there a procedure to always use fallback mode?
Fallback mode is just that: a fallback. Therefore it is not planned to have a manual 'Choose your User Interface' application.
You can of course open the hood and rewire what gdm and gnome-session do. But doing so might void your warranty...
Gdm looks at the files in /usr/share/xsessions to find out how to run the chosen session. For GNOME, the file is /usr/share/xsessions/gnome.session and it just executes gnome-session. One way to change this is to use the --session option of gnome-session. Without a --session argument, gnome-session looks at the files in /usr/share/gnome-session/sessions to find out what should be run in the session. There are two files, gnome.session and gnome-fallback.session which define the regular GNOME session and the fallback session. To decide whether the regular session can be used, gnome-session consults the IsRunnableHelper entry in the gnome.session file. Changing that line to read will force the fallback to be used.
The final GNOME 3 release will have a way to force the fallback mode to be used, with a switch in the 'System Info' panel; but this switch is not yet available in the F15 alpha release.

The window controls (minimize/maximize) are different in gnome-shell, where can I find information about these design decisions?
Please refer to http://mail.gnome.org/archives/gnome-shell-list/2011-February/msg00192.html

The dash is broken, I can't add more than 13 favourites to it!?
It's known problem, which also fits into the dash resizing when you drag'n'drop new items to it.

I can't read the full name of certain applications when searching for them in overview mode. Can I haz tooltips?
Tooltips, maybe not, but a solution is being worked on. Follow the discussion in this bug.

I can't change my font size, really?
You can change it for the applications, in the Universal Access settings. For the shell, it's currently not possible, but it will get fixed.

Where has the appearance capplet gone?
GNOME 3 is deemphasizing user customization, or 'theming' in favour of a 'just works' and 'slick out of the box' approach. Therefore, theme changes are no longer exposed in the core configuration UI, except for accessibility themes such as 'High Contrast' or 'Inverse', which are available in the 'Universal Access' panel.
Changing the desktop background is still possible, using the 'Background' panel. The mechanisms to select a different theme are still in place, e.g. you can change the toolkit theme using the gsettings command:
At this point, the only toolkit themes that are available for both gtk2 and gtk3 are 'Adwaita' (the default GNOME 3 theme) and the accessibility themes, though.

I don't like how hard it is to create workspaces. Is this the final design?
It's not. Owen has been working on implementing Jakub's video mockups. See this bug and this blog post for all the links.
The new workspace design will land with GNOME 2.91.90 right after the F15 alpha.

This is way slick. But the NetworkManager applet looks really out-of-place. Can you make it look cool?
Yes (see GNOME bug#621707)! System status legend Giovanni is on the case.
The new network menu will land shortly after NetworkManager 0.9.

How do I restart my computer?
Type "reboot" in a terminal? Unfortunate, but how to present it needs a bit of design work. Just adding another menu item in the system menu just muddles it.
As a little easter egg, the 'Suspend' menuitem in the user menu of the shell turns into 'Power off' when you hit the Alt key.
As of GNOME 2.91.92, the 'Power Off' dialog has a 'Restart' button, like this, for your easy restarting pleasure.

When I switch to my self-built upstream kernel, gnome-shell refuses to run. What gives ?
There can of course be many reasons for this kind of problem. A typical one that has been seen before is that your kernel may be built without support for extended attributes and/or ACLs. The tell-tale symptom of this is that /dev/dri/card0 cannot be opened, causing your X server to fall back to software rendering. Another way to diagnose this kind of problem is to look at the output of the glxinfo command. If it says something like:
you are not getting hardware acceleration, and gnome-shell will refuse to run.

I don't have a self-built kernel, and my hardware should be capable, but gnome-shell still won't run. Why ?
Again, check the output of the glxinfo command for a string like
Other possible reasons for X to come up with the software renderer include
* forgotten kernel commandline options (like nomodeset)
* a leftover /etc/X11/Xorg.conf