This document is the introduction to a series. Subsequent documents are:

Factory 2.0 is a Red Hat funded initiative out of PnT DevOps to make some big changes to the "build-to-release" pipeline, a.k.a the "Factory". One of the most difficult parts of this project has been figuring what Factory 2.0 even is (and what it isn’t). Like with so many things, if you get 5 people in a room and ask them what Factory 2 is, you’ll get 6 different answers. This document will try to clarify and dispel some of the ambiguity.

I've heard people talk about factory 2.0 as a "system" in the way we think of Bodhi or Koji as a system. In some of our problem-statement interviews people talk about how "excited they are for Factory 2.0 to land" and how they can't wait to "submit requests to the system". This is worrisome. Factory 2.0 won't be a single webapp. We're talking about the pipeline as a whole - the sum of all our hosted systems.

Another buzz about town is that factory 2.0 will be a from-scratch rewrite of our pipeline. Factory 2.0 won’t be a rewrite of every tool we run. We’re going to be looking at incremental tweaks that span the pipeline and that line up with a long term vision, informed by best practices and project needs (as best we can figure those two things out).

With so many people having so many different ideas about what we should do, we set out to try and systematically define it. We spent most of FY17 Q1 gathering input from stakeholders and assembling a list of "problem statements" (a.k.a complaints!). We then posed that list back to our stakeholders in the form of a survey, collected the results, and wound up with the following prioritized list.

Analysis and Order of Execution 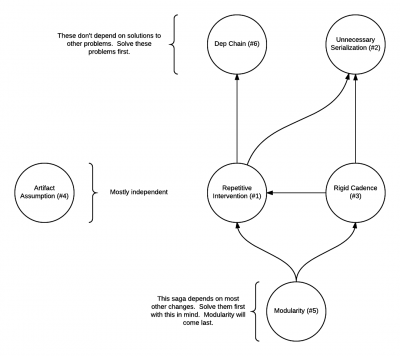 Let’s now consider the remaining five problem statements: Repetitive Intervention (#1), Unnecessary Serialization (#2), Rigid Cadence (#3), Dep Chain (#6), and Modularity (#5). In what order do we tackle them? What dependencies exist between their solutions?

The Dep Chain (#6) problem is mostly independent. As described in the original statement, we have dependency information scattered throughout our systems, but it is heterogenous, inconsistent, and hard to find. We already have a plan for how to integrate this in the Fedora Modularity efforts (video) via PDC.

The Unnecessary Serialization (#2) problem can be solved mostly independently. It is both deep and broad (involving nontrivial changes in many different tools) and is therefore difficult. It is mostly about moving the gating logic peppered throughout all our tools down the chain to Errata Tool/Bodhi and removing any restrictions in tools that presume some preliminary gating.

Lastly, Modularity (#5). What a beast. It challenges deeply held assumptions in our pipeline about lifecycle (and Rigid Cadence (#3)). The combinatorial explosion of builds, buildroots, tags, targets, channels, layered products, etc.. all mean that life is no longer possible if Repetitive Intervention (#1) is the norm. Like all roads lead to Rome, all Factory 2.0 problems lead to Modularity (#5).

The above analysis of requirements between problems and their solutions is helpful, but in real life we have a twist! We’ve identified here that Modularity (#5) should come last among problems that we try to solve. However, as I’m writing this we have an elite cross-functional scrum team already at work in Fedora trying to make modularity a reality. It is happening first!

Not all is lost. This document is in part a product of devops partnership with that team, discovering the problem relationships as we try to solve Modularity. For instance, the Dep Chain (#6) and Repetitive Intervention (#1) problems have already been identified there and have subteams actively working on them.

To not shoot ourselves in the foot

The modularity working group is fond of quoting: "The modularity effort will give us lots of power, enough to shoot ourselves in the foot." The same goes for us here - we could easily increase unpredictable demands on releng's time if we don't make our own organizations (PnT DevOps and Fedora Infra) into first-class stakeholders in the design. We can’t let ourselves hack our way through all this in order to deliver on time, or we (Pnt DevOps and Fedora Infra) will suffer more technical debt than we do today.