Fedora Scientific spin aims to create a Fedora desktop based spin which will have a generic tool set for Linux users whose profession/studies involve scientific research. The spin aims to be directly under the umbrella of the Fedora Science and Technology SIG.

I am a long-term Linux user and have been into full-time scientific research for the past 3 years now. Every time I have to do a fresh-install of Linux (not so frequently, of course), I have to download a bunch of tools which I use regularly. For example, gnuplot, xfig, LaTex compilers, numpy, etc. Say hello to Fedora-Scientific. The idea is to create a Fedora spin based on the Fedora KDE Desktop, but having additional tools which most researchers will use.

Although the motivation for such a spin is purely "scratching my own itch", but I won't be wrong in stating that a significant percentage of Fedora users will be involved in scientific research use a number of numerical libraries, tools and libraries in their daily work. Pulling all those packages every time a fresh install of Fedora is done is time consuming and redundant.

Moving beyond Fedora users, such a spin will definitely attract new or seasoned Linux users who feels the need to have some the scientific software that he/she uses to be already installed.

I discussed this idea on mailing lists and the CLUG folks showed a lot of +1s to the idea (Thread). As was pointed out to me (which I didn't think before!), Fedora Scientific will be complimentary to the relatively more stable, RHEL based, Scientific Linux, as Fedora will cater to a similar audience, but giving the users more bleeding edge software experience.

This spin will be based on the Fedora KDE spin. A number of tools and libraries for scientific research is included. I have decided upon the current set of applications based on my own experience and some discussions on mailing lists, notable the Canberra Linux Users Group (as pointed out earlier).

The current set of packages include an IDE, tools and libraries for programming in C, C++, Python, Java and R. Also included along with are libraries for parallel computing such as the OpenMPI and OpenMP. Tools for typesetting, writing and publishing are included. Scientific computing libraries and tools such as the GNU Scientific Library, SciPy, Octave, Maxima are also shipped in this spin.

A detailed list of all packages can be seen from the kickstart file. To see some discussions/thoughts/decisions and to add your own, please visit the Talk:Scientific_Spin page. The ISO stands at about ~3.2 G.

Scientific_Packages_List contains a list of all the packages with a brief description of their functionality. Also refer to the (in development) Fedora Scientific documentation.

Considering that there is a large number of packages being shipped, it is perhaps a good idea to at least do a "smoke" testing of the functionality of all the packages. Often, the entire functionality of a tool/library is split into more than one package and hence pulling in only the main package is no guarantee that the tool/library/application will work.

Scientific_Packages_Testing contains some ways this can be done. Please add your own ideas.

The Website design team has started working on the spins page. Thanks Guys! Ticket

Fedora Scientific Spin brings together the open source scientific and numerical tools used in research along with the goodness of the Fedora KDE desktop. These tools range from libraries such as the GNU Scientific library, the SciPy libraries, tools like Octave and xfig to typesetting tools like Kile and graphics programs such as Inkscape. Fedora Scientific Spin aims to prevent the need to re-install your favorite scientific packages every time you re-install Linux. 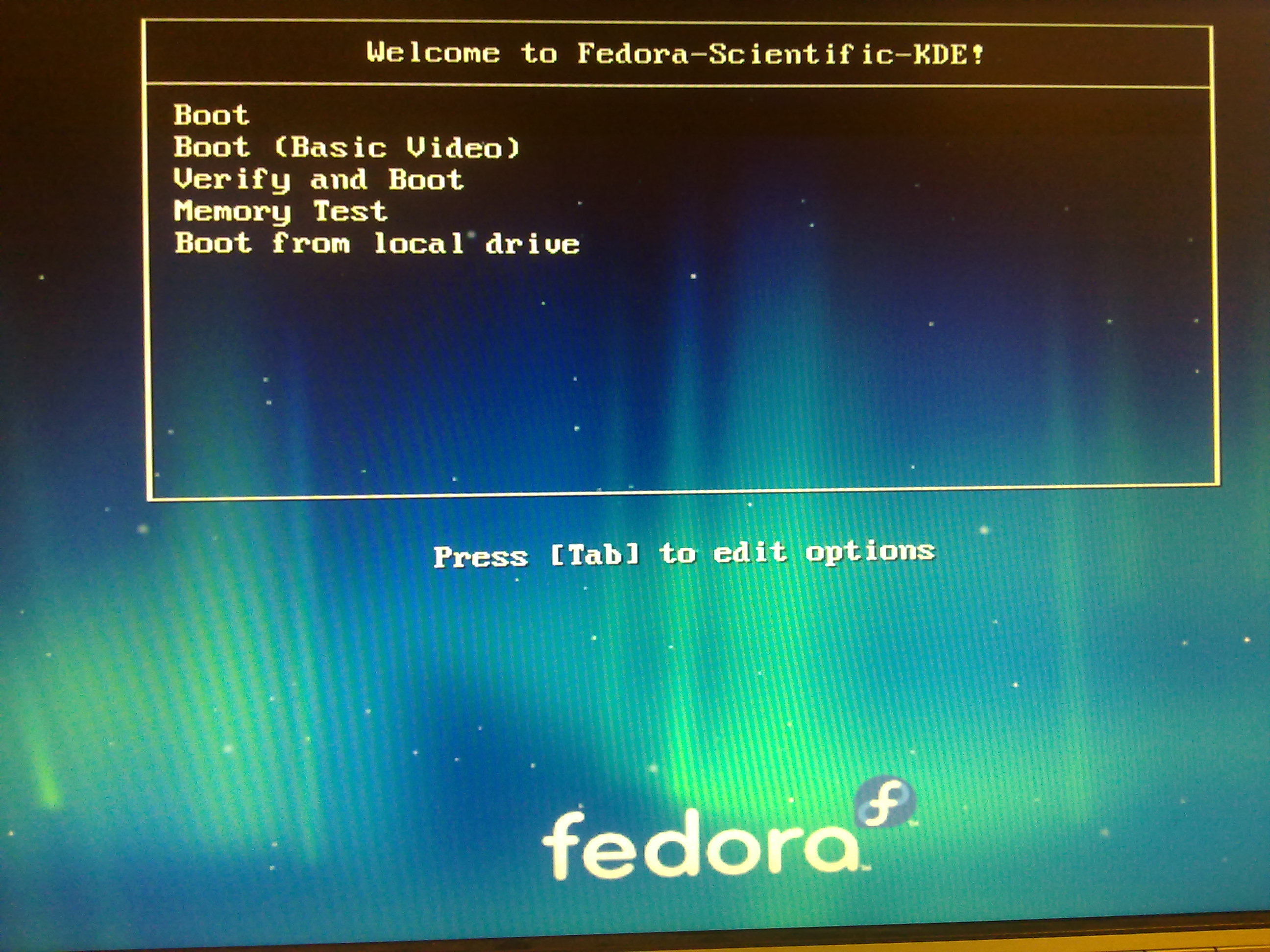 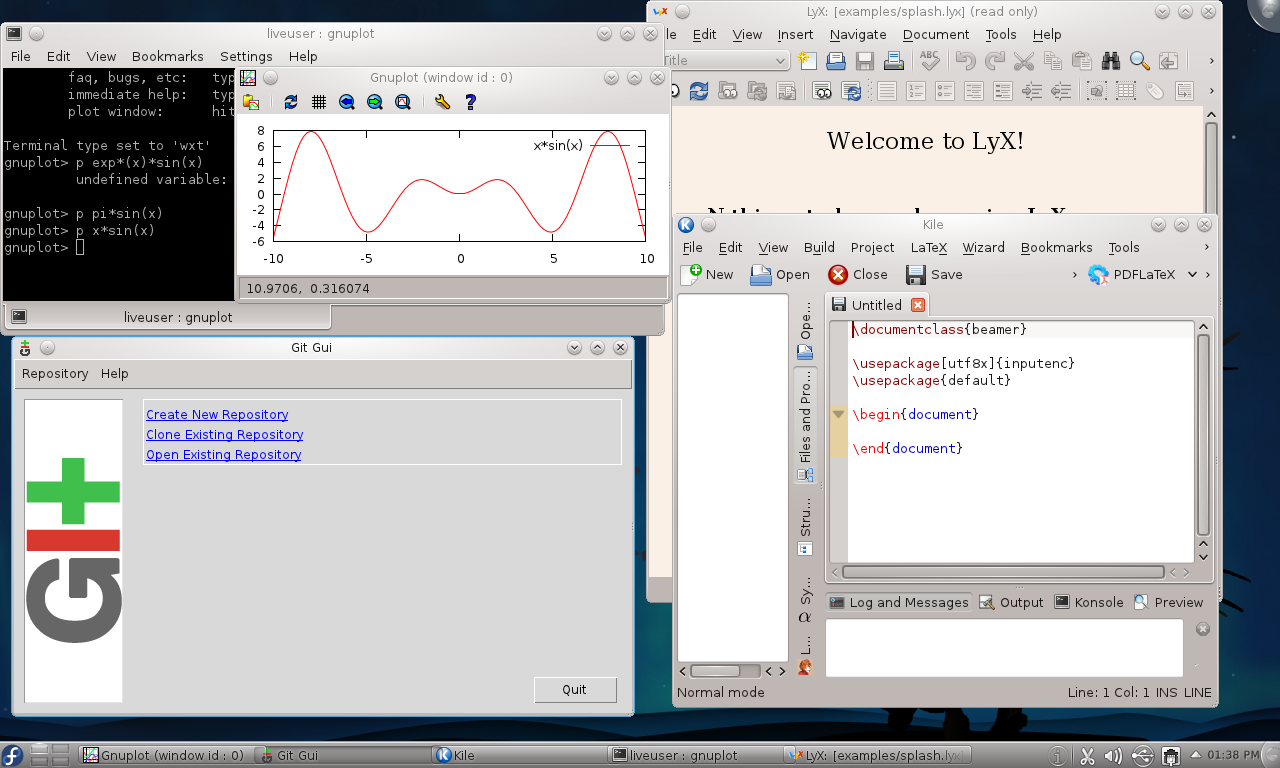 Fedora Scientific is available as a Live DVD download - via torrent or direct download. A LiveDVD is an operating system that is executed upon boot, without installation on a hard drive. A desktop icon can be used to install the OS if wanted. Once you have the ISO, you can either create a Bootable USB stick or burn it to a DVD.

General help is available in irc channel #fedora-science on irc.freenode.net.

Users and developers are also available on the Fedora Scitech List

Sometimes you may encounter an issue with this spin that you can get help with using general Fedora support resources. A list of those resources is available at the Fedora 'Get Help' page.

Submitted a ticket to the design team