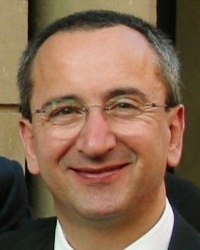 I live in Livorno (Tuscany - center of Italy). I hold a degree in Electronic Engineering from the University of Pisa (1982). I am currently working as a consultant in the areas of networking, system administration, architecture of IT systems. I began using Unix (V7) before graduating (1981) on a Zilog Z8000 development system. I am using Internet since 1988, before the birth of the Web: I was working for Olivetti, the major Italian IT company at the time, and they had a private link with their R&D group in Cupertino, CA. Later I switched to Linux (from the early times of kernel 0.98 without TCP/IP, using the SLS distro at the beginning, and later Slackware). Years later I switched to Red Hat, then Mandrake, and finally Fedora (Core 3). I am currently using Fedora or CentOS on all the servers I manage, and I recommend Fedora to everybody is currently using other distributions. I especially like the availability of updates whenever they are required, the ease to install them automatically and the ability to do a major version upgrade remotely. I have also experience in programming (C, PHP) and in the use and integration of open source software.

I decided to register as a Fedora user asking to be added to the Ambassadors community because I actually promote Fedora, and I'd like to continue doing it with some more "official" involvement.